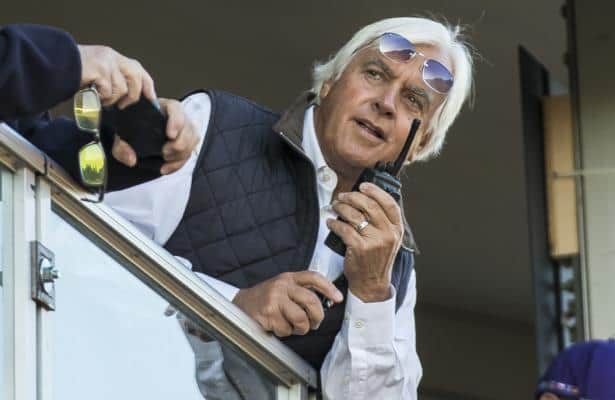 Dubai World Cup (G1) winner Country Grammer and Preakness pacesetter Armagnac were among the first horses to work for trainer Bob Baffert at Santa Anita following his return from a 90-day suspension on Sunday.

On Wednesday, Country Grammer breezed five furlongs in 1:01.2, which was the seventh fastest of 16 moves at the distance. The 5-year-old horse by Tonalist has worked six times since the end of May. (Read more about Wednesday works by graded-stakes winners.)

Last month, Sean McCarthy, who oversaw Country Grammer’s training during Baffert’s suspension, said he could use the $300,000 San Diego (G2) on July 30 at Del Mar as a prep for the $1 million Pacific Classic (G1) five weeks later.

[Related: With suspension over, Baffert back to work at Santa Anita]

Also working Wednesday for Baffert was Rockefeller, who went five furlongs in 1:02.4. The 3-year-old son of Medaglia d’Oro has not raced since a 10th in the March 5 Gotham (G3). He has been working steadily at Santa Anita since the second week in May.

On Monday, Armagnac drilled five furlongs in 1:01.2. It was his fifth work since early June. The Quality Road colt won an allowance at Santa Anita two weeks before testing the deep waters of the Preakness where he led for six furlongs before fading to seventh.

Baffert was not immediately available for comment on Wednesday. In 2 1/2 weeks, Monmouth Park will host the $1 million Haskell (G1) for 3-year-olds, a race Baffert has won a record nine times. The Hall of Fame trainer has yet to indicate who might make the cross-country trek for this year's edition.

Also on Monday, 4-year-old Defunded worked a bullet half-mile in 47.6 seconds. The Dialed In gelding won a May 8 allowance race at Santa Anita following a nine-month layoff and came back to be second in the Hollywood Gold Cup (G1) on May 30. Defunded would seemingly be another that could show in the entry box for the San Diego.

Baffert has also worked a quartet of fillies so far this week. Adare Manor, most recently second in the May 20 Black-Eyed Susan (G2), breezed four furlongs in 49.2 seconds. The graded stakes-winning daughter of Uncle Mo worked twice last month, but then the tab had a three-week gap before Monday’s drill.

Ganadora, most recently fourth in the June 12 Summertime Oaks (G2), breezed four furlongs in 49.2 seconds, while 0-for-4 maiden Brocade went the same distance in 49.0 seconds.

Recent maiden winner Fun to Dream breezed five furlongs in 1:00.2 on Monday, which was the fastest of 34 moves at the distance. The 3-year-old daughter of Arrogate, who aired by 6 1/4 lengths in her May 28 bow at Santa Anita, was bred by Baffert and Connie Pageler and is campaigned by Pageler and Baffert’s wife, Jill.

Finally, unraced 3-year-old American Refugee worked five furlongs from the gate in 1:00.8 on Wednesday. The American Pharoah colt has been working since the first week in May.