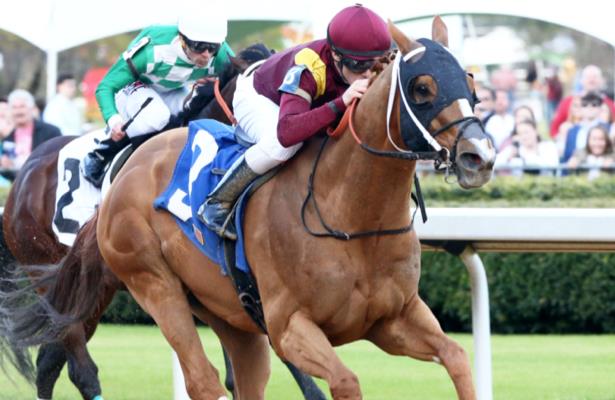 The Grade 3, $350,000 Count Fleet Sprint Handicap has drawn a field of 11 older male sprinters headlined by the hard-knocking one-turn star Whitmore, who's seeking to become the first horse to win this six-furlong event three times after victories in 2017 and 2018.

The race is named after the sixth winner of the Triple Crown who raced during World War II in 1942 and 1943 and sprinted in his first 11 starts as a 2-year-old. The son of Reigh Count won the Belmont Stakes by 25 lengths but, then again, had just two rivals to defeat.

Mitole defeated Whitmore in the 2019 Count Fleet when making the second start of what would become a championship campaign ending with a Breeders' Cup Sprint win. Will another up-and-comer follow in his footsteps?

Here is a full-field analysis of the Count Fleet, which is slated as Race 8 of 11 on Saturday at Oaklawn Park with post time scheduled for 5:14 p.m. ET. Morning line odds are projected by Horse Racing Nation.

1) Lexitonian [ML 20-1 – Speightstown – J. Sisterson/A. Beschizza – 10: 3-0-2 - $256,848] The Calumet Farm runner will be making his 2020 debut having been last seen running third behind Engage and Whitmore in the Phoenix (G2) at Keeneland last October. He had the lead at the stretch call before giving in. That makes this a tough spot after a six-month layoff. Consider that he went off at odds of 51-1 and 46-1 in his most-recent starts. Toss.

2) Flagstaff [ML 5-1 – Speightstown – J. Sadler/J. Rosario – 11: 5-3-2 - $403,785] This 6-year-old is in outstanding form with four wins, two seconds, and third in his last seven starts. Last seen, he stalked the pace to win the San Carlos (G2) at Santa Anita in March. He has shipped from Arkansas from California, but trainer John Sadler has been running a lot of horses at Oaklawn, operating a string there this meet. Win contender.

4) Bobby’s Wicked One [ML 9-2 – Speightstown – A. Stall Jr./M. Mena – 15: 6-4-1 - $544,257] He has two-front running stakes victories in a row at Fair Grounds came against three-horse fields and while going Saturday's six-furlong distance. Both of those wins came as the odds-on favorite. He will be making his first start at Oaklawn, although he has trained locally. Win contender.

5) Wendell Fong [ML 20-1 – Flat Out – J. Englehart/D. Cohen – 7: 3-0-1 - $135,740] He made his 2020 debut with a third-place finish in Oaklawn's Hot Springs Stakes after running 10th in the Amsterdam (G2) last summer at Saratoga when Shancelot decimated his competition. Wednell Fong is certainly entitled to improve off that last race, but this is a strong field against which to do it. Toss.

6) Mr. Jagermeister [ML 20-1 – Atta Boy Roy – V. Lund/T. Thompson – 22: 11-4-2 - $577,460] A rare Minnesota-bred competing at the graded level, he set the pace in the Hot Springs last time only to get run down by Whitmore, who he meets again here. Mr. Jagermeister has a great record at six furlongs with seven wins in 13 starts, but he will have to deal with other front runners when facing a tough pace scenario. Toss.

7) Hidden Scroll [ML 5-2 – Hard Spun – B. Mott/M. Garcia – 5: 2-0-1 - $97,300] Since his 14-length maiden score at Gulfstream Park debuting as a 3-year-old, Hidden Scroll has been the center of some debate. His performance did not live up to his short odds on the Kentucky Derby trail but the Juddmonte Farms homebred returned from a 10-month layoff to win his 2020 debut by more than 12 lengths while leading every step of the way. Bill Mott now seems to have Hidden Scroll pegged as a sprinter as he seeks his first stakes victory. It will be interesting to see how much support he gets at the windows against this veteran field. Win contender.

9) Whitmore [ML 2-1 – Pleasantly Perfect – R. Moquett/J. Talamo – 33: 13-10-3 - $1,402,600] This distance specialist is now 7 but won for the 13th time in his career in the Hot Springs last out. Eight of those victories were at Oaklawn, pushing his earnings close to $3 million. Whitmore should get plenty of pace to set up his familiar closing run. The veteran rarely runs a bad race and is a deserving favorite in here. Win contender.

10) Share the Upside [ML 20-1 – Maclean’s Music – S. Asmussen/F. Geroux – 14: 5-4-1 - $349,597] This 5-year-old does his best work on the front end. He won the King Cotton at Oaklawn in his 2020 debut after six months away but then couldn’t get the lead in the Hot Springs and finished fifth. Trainer Steve Asmussen broke out of his Oaklawn losing streak in a big way last weekend. Still, it looks like the pace will be very hot. Toss.

11) Nitrous [ML 30-1 – Tapit – S. Asmussen/R. Santana Jr. – 12: 3-3-1 - $412,246] Off since September, this 4-year-old will make his first start against older horses. He last found the winner’s circle in the Bachelor a year ago at Oaklawn Park when he was victorious with a late rally. Since then he was second twice in the big Saratoga sprints for sophomores. This is a tough spot after a long layoff, although he will get an ideal pace setup. Toss.

Summary: This race is loaded with front-running types like Bobby’s Wicked One, Hidden Scroll, Lexitonian, Mr. Jagermeister and Share the Upside. Basic handicapping rules say that the off-the-pace running style will have an advantage.

That means Whitmore should get an ideal setup as he goes for his ninth career victory at Oaklawn Park. However, if you are looking for an alternative to the likely favorite, then you should consider Flagstaff, who exits a quality win last month at Santa Anita.