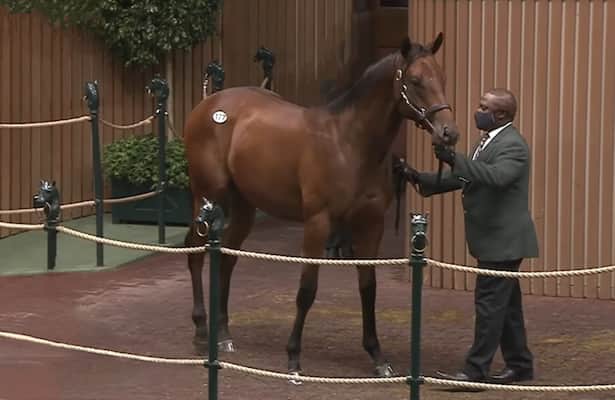 A relatively quiet racing week is unfolding in the aftermath of last week’s non-stop Breeders’ Cup qualifying action. However, there are a couple of noteworthy maiden special weights for juveniles taking place over the Belmont at the Big A and Keeneland main tracks.

Let’s search for future Triple Crown contenders and highlight four of the most intriguing newcomers in the entries:

Pedigree: Into Mischief–Superioritycomplex, by Hard Spun

One of the most expensive juveniles debuting this week is Extra Añejo for Steve Asmussen. The promising son of three-time leading North American sire Into Mischief sold for $1.35 million as a yearling.

There’s a lot of promise and potential in the pedigree of Relampago Verde. Sire Bolt d’Oro won multiple Grade 1 races as a juvenile and is off to a hot start at stud. Dam Colina Verde won three Group 1 races in her native Brazil and counts Brazilian Group 1 winner Greenzapper and the graded stakes-placed Road to the Kentucky Derby alumni Limonite among her foals.

Relampago Verde is bred to run long, so the seven-furlong and 184-foot distance of Keeneland’s Beard Course might be a little short for him. Plus, trainer Kenny McPeek strikes at only a 7 percent race with first-time starters, so we shouldn’t necessarily expect Relampago Verde to win sprinting on debut. But down the road, he’s eligible to develop in a highly positive direction.

Pedigree: Into Mischief–More Mojo, by More Than Ready

The second of three Into Mischief runners I'm highlighting this week is Tabeguache, whose dam sire, More Than Ready, has sired the winners of more Breeders’ Cup races (seven) than any other stallion.

Tabeguache has put together a lengthy work tab for four-time Eclipse Award-winning trainer Chad Brown. He has posted 10 workouts on a practically weekly basis dating to July 31, wrapping up with five furlongs over the Belmont Park training track in 1:00.4 last Friday. The bay colt should be fit to run one mile on debut and potentially challenge at enticing odds.

Sold for $475,000 as a yearling, this son of Into Mischief was produced by the unraced mare Fifty Foot Woman, a daughter of three-time leading North American sire Giant’s Causeway.

Giant’s Causeway is a source of stamina to balance the speedier genetics of Into Mischief, so Inflationary boasts a promising pedigree for long-term success. The Chad Brown trainee clocked five furlongs over the Belmont Park training track in 1:00.4 last Friday and has high-percentage jockey Flavien Prat named to ride, so don’t count Inflationary out of the mix.