Kentucky Downs: Could Ready to Purrform be another Arklow? 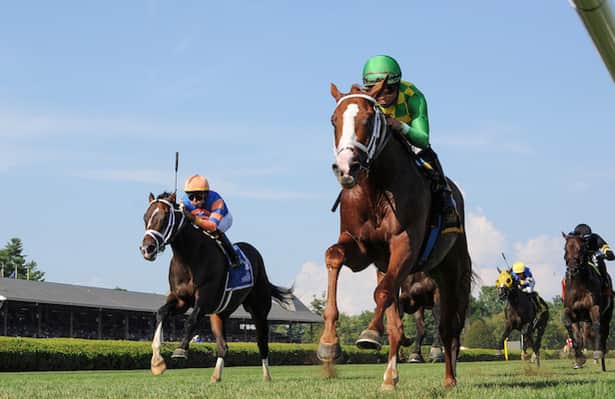 Ready to Purrform comes into the full field of 12 3-year-olds as the 3-1 favorite in the Dueling Grounds Derby.

The son of turf champion Kitten’s Joy appears the horse to beat off his victory in Saratoga’s National Museum of Racing Hall of Fame Stakes (G2). And if he wins the 1 5/16-mile Dueling Grounds Derby, owner Donegal Racing can start daydreaming that he might someday fill the hoofprints of 8-year-old stablemate Arklow, who on Saturday will attempt to become the first three-time winner of the $1 million Kentucky Turf Cup (G2) at 1 1/2 miles. It will be Arklow’s fifth time to run in Kentucky Downs' signature race.

Get everything you need to win at Kentucky Downs

“He certainly could” be the heir apparent to Arklow, said Donegal founder Jerry Crawford. “He’s not there yet. I think he does maybe have the best (handicapping) numbers by a tick in the Derby. A lot of people have an unknown in this kind of a race in that location. We have two unknowns. We’ve wanted him to run this long for quite a while, but we could never get a race at that distance. We think he’ll handle the distance, and we don’t have any reason to believe he won’t be able to handle the track itself. But you don’t know until you know.”

Ready to Purrform, who won his debut as a 2-year-old at Ellis Park right before Kentucky Downs’ meet began, didn’t have a chance to run at the Franklin track last year. Instead he captured the Laurel Futurity in his second start, with both victories coming at 1 1/16 miles. Since then he’s raced only at a mile, including starting 2022 with a second by a neck in a Pimlico stakes on Preakness Weekend, third in Belmont’s Manila and then winning the Hall of Fame.

“We’re very excited about him,” Crawford said. “He displayed his ability and versatility in his last out at Saratoga. He had been coming from off the pace, and Joel (Rosario) put him on the pace and prevailed wire to wire.”