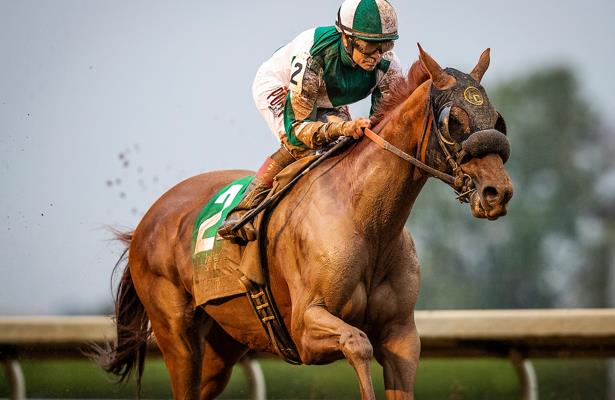 “She ate up everything last night and is good this morning,” Correas said Monday morning of the 6-year-old mare, who became the fourth horse to win the Spinster in back-to-back years.

Last in the field of five in the early going, Blue Prize was steered to the outside at the head of the stretch by Joe Bravo and eventually wore down favored Elate.

“At the three-sixteenths pole, I saw they were not going away from her,” Correas said. “I didn’t know if she would win, but I knew she had a big chance.”

Blue Prize follows in the tradition of South American runners that get better with age, including the likes of another two-time Spinster winner Bayakoa (ARG), who triumphed here at ages 5 and 6; and Paseana (ARG), the 1993 Spinster winner at age 6.

Correas' other top earners have been Grade 2 winner Kasaqui and Dona Bruja, a Grade 3 winner in the U.S. Both were, as with Blue Prize, bred in Argentina.

"The horses of my country have made me look good," he said. "Thanks to the trainers that trained them before me. They did a great job developing them."

Correas said he would start working on shipping plans for Blue Prize, who finished fourth in last year’s Distaff at Churchill Downs. The bulk of her training for the Distaff will be done at Keeneland.

Elate, owned by Claiborne Farm and Adele Dilschneider, returned to trainer Bill Mott’s barn at Churchill after the race Sunday.

As the lone 3-year-old in the race and facing older horses in Grade 1 company for the first time, Dunbar Road was beaten only 1¼ lengths as the second choice. “She has a bright future,” Beckman said.

The victory in the Dixiana Bourbon earned Peace Achieved a spot in the $1 million Breeders’ Cup Juvenile Turf to be run at a mile at Santa Anita on Nov. 1.

Peace Achieved held off Vitalogy for the victory.

Trainer Brendan Walsh said Vitalogy was fine Monday morning with plans to be determined as to whether Vitalogy would remain here or go to Walsh’s barn at Churchill to prepare for a possible Breeders’ Cup run.

Vitalogy, who began his career in Europe with trainer Joseph O’Brien, is owned in partnership by Qatar Racing Limited, Marc Detampel and Bottle Rocket Stable.

Walsh already has a Breeders’ Cup Juvenile contender in Maxfield, winner of Saturday’s Claiborne Breeders’ Futurity (G1), who is going to do his pre-Santa Anita training at Keeneland.

Within a span of 30 minutes Sunday, trainer Wesley Ward stamped his footprint all over the composition of the $1 million Breeders’ Cup Juvenile Turf Sprint to be run Nov. 1 at Santa Anita at 5 furlongs.

“She’s kicking and bucking on her morning walk,” Ward said Monday morning of Kimari, who beat the boys for the second time in her career. “ ‘The Four Wheeler’ will be arriving soon.”

Both the Indian Summer and Futurity were Breeders’ Cup Challenge races.