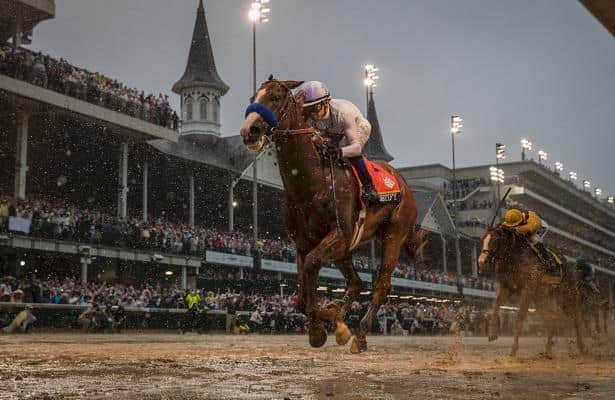 The 2020 Kentucky Derby isn't joining the laundry list of sporting events postponed to prevent the spread of COVID-19, also known as coronavirus. At least not yet.

In a statement Thursday, Churchill Downs Incorporated said "preparations to host Kentucky Derby 146 on the first Saturday in May at Churchill Downs are still moving forward," with the May 2 race now 51 days out.

On Wednesday night, the NBA stepped forward as the first major league to suspend play amid this pandemic with members of the Utah Jazz testing positive for coronavirus. On Thursday, the NCAA basketball tournament was canceled.

"With the event still seven weeks away," Churchill's statement reads on the Derby, "a decision will be made closer to that date, with respect to postponing the event until later in the year, using the most recent information while working with and seeking guidance from public health experts and authorities."

The Derby, which is a time-sensitive event given it's restricted to 3-year-olds and begins the prestigious Triple Crown series, has been run 89 times on the first Saturday in May, including each year since 1946.

Billed as the longest continuously held major sporting event in the U.S., the Derby has continued amid wars and The Great Depression, among other societal disruptions. The Derby has run outside of May only twice, according to Churchill Downs' records: on April 29, 1901, and June 9, 1945.

Two prep races for the 2020 Derby remain on schedule for Saturday.

Meanwhile, at Turfway Park in Northern Kentucky, the CDI-owned facility will stage the Jeff Ruby Steaks (G3) with "only essential staff, horsemen, owners, limited friends and family and media in attendance."