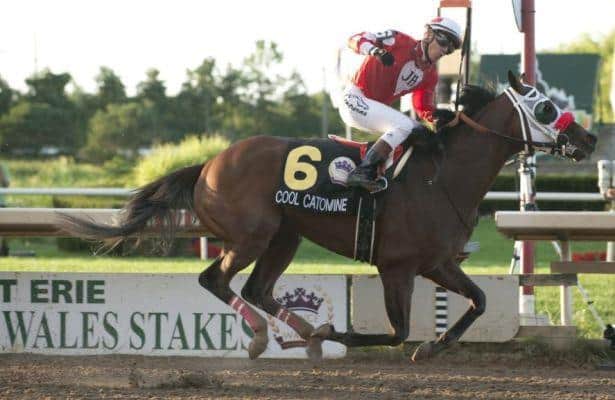 Cool Catomine, a 14-1 longshot, edged past favoured Aurora Way in the last strides to take the 82nd edition of the Prince of Wales, second jewel of Canada’s Triple Crown of Racing, Tuesday at Fort Erie Race Track.

Luis Contreras rode the Spring At Last bay to his second career score, for trainer John Ross, who also owns a piece of the horse with Jack of Hearts Racing.  State of Honor was third.

It was Contreras’ second straight Triple Crown win after guiding Holy Helena to a win in the Queen’s Plate, the first gem of the three-race series at Woodbine.

State of Honor and Cool Catomine duelled through early splits of 23.52 and 47.99 seconds, but Tiz a Slam made a brief bid mid race.  Around the final turn, State of Honor held a short lead, but Cool Catomine wore that rival down, while holding off a late bid from Aurora Way in 1:55.63 for 1 3/16 miles.

Ross, who won the 1997 Breeders’ Stakes with John the Magician, was emotional after the win.

“It’s an important moment in my life,” Ross said. “This tops it. We ended up coming through today. We’re overwhelmed by it. I love it when a plan comes together. We had some delays earlier on in his career.  We had to find out some stuff about him and I have to commend Luis because he said this horse could use blinkers.

“So we added them and look how it’s worked out,” continued Ross. “As a two-year-old, we took a lot of time with him. We took him to Florida with a good foundation. All these things and the time we took with him all paid off today.  We could see the horse coming forward in all of his races. We’re counting our blessings today.”

It was Ross’ first winner in the race after finishing second with Arco’s Gold, behind Wando, Canada’s most recent Triple Crown winner in 2003.

Contreras, who is on a tear winning eight races in his last 21 mounts, including the Grade 3 Schuylerville Stakes at Saratoga on Friday, won his second consecutive Prince of Wales (Amis Gizmo) and third overall (Pender Harbour, 2011).

“We come into these races with all the confidence we can,” said Contreras. “I’m so glad this horse found me and brought us here with this win in Fort Erie.  I had a pretty good trip. He gives you everything he has as long as you keep riding him.”

"It's only the third time he's started,” Hernandez said.  “Turning for home he was looking everywhere and when I asked him it was hard to get anything going. He's going to run very good in the next couple starts. He's a very good horse. He tried hard to the wire and galloped out great.”

State of Honor was also brave in defeat.

"He ran a good race, but he made a bad step at the eighth pole,” said jockey Patrick Husbands. “They were coming to me but he wasn't letting them by until he made the bad step. He still tried to get second. He tried hard and he wasn't giving up."

“We had a fantastic crowd, perfect weather, and great racing,” said Tom Valiquette, chief operating and financial officer of the Fort Erie Live Racing Consortium. “We tried to make the day more of a festival this year by bringing in extra entertainment and food vendors, and it was a success.  Our event has been getting better and better every year since moving it to a Tuesday night, and we look forward to building on that momentum next season.”

Cool Catomine, bred in Ontario by Bernard and Karen McCormack, banked $300,000 in victory while improving his record to 2-0-1 from five starts.