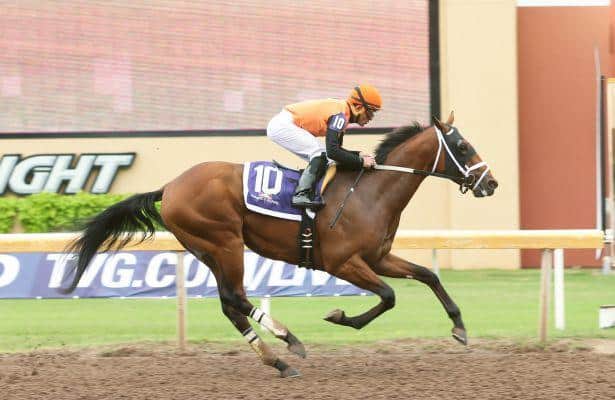 Billed as “Stars of Tomorrow I,” each of Sunday’s 10 races is for 2-year-olds. The Spendthrift Stallion Stakes, one of three stakes on the juvenile showcase day, is the featured event and will go as Race 9 at approximately 5 p.m. (all times Eastern). The first race is 1 p.m.

The new Spendthrift Stallion Stakes – made possible through a partnership between Churchill Downs and Lexington, Ky.-based breeding operation Spendthrift Farm – is a lucrative seven-furlong sprint exclusively for 2-year-old offspring sired by any active or non-active Spendthrift stallion, including all Spendthrift-owned stallions standing regionally in North America.

Cool Arrow, bred by H. Allen Poindexter, owned by Brad Grady and trained by Joe Sharp, is one of nine entries sired by top stallion Into Mischief, who stood for $45,000 during the 2016 breeding season.

“We’re in it to win it,” Sharp said. “For this kind of money, we’re excited about the opportunity.”

Cool Arrow figures to vie for favoritism in the Spendthrift Stallion after surging to a comfortable 2 ½-length victory in Remington Park’s $75,000 Kip Deville on Sept. 25. It was the Kentucky-bred’s second victory in four starts and his first race since undergoing throat surgery to alleviate a breathing issue after his July 15 maiden-claiming win at Laurel Park.

“For him to run that big of an effort, I think he’ll definitely improve off of that,” Sharp said. “He’s come back and trained fantastic at Trackside. We’re really looking forward to Sunday. I don’t think the seven-eighths (of a mile) will be an issue.”

Cool Arrow landed post 12 and will be ridden for the first time by Brian Hernandez Jr.

“I like the 12-hole because it’ll let the jockey monitor the speed and he can do as he pleases,” Sharp said. “Cool Arrow doesn’t need to be on the lead; he can come from off it. But we’ll have the run down the backside to make some decisions. We’re confident in Brian’s ability to make those right decisions.”

Hernandez takes over the reins from Joel Rosario, who will ride Juddmonte Farms Inc.’s homebred South Sea, also a Kentucky-bred son of Into Mischief. Overall, Rosario was named on seven mounts Sunday, and five are aboard juveniles trained by Hall of Famer Bill Mott, including South Sea, who invades from New York after scoring an up-the-rail, one-length maiden special weight victory at Belmont Park on Oct. 8.

William K. Helwig and Brent Gasaway’s All Right, the 44-1 upset winner of the $343,855 Kentucky Downs Juvenile at seven furlongs on grass for trainer Kellyn Gorder, will test dirt for the first time after finishing ninth of 14 in the $250,000 Bourbon (Grade III) at Keeneland on Oct. 9.

Another top contender is Churchill Downs Racing Club’s maiden Warrior’s Club from the barn of Hall of Fame trainer D. Wayne Lukas. The Warrior’s Reward colt hopes to delight it’s 200 members after crossing the finish line in second in his last two starts against crack juveniles Wild Shot, who’d go on to run third in the Breeders’ Futurity (GI) at Keeneland, and Speedmeister, who could go favored in Sunday’s $80,000-added Street Sense at Churchill Downs after a dazzling maiden triumph at Keeneland.

On Probation and Sister Nation are fillies.

Many of the races on Sunday could serve as local steppingstones to the pair of Grade II, $200,000, 1 1/16-mile counterparts on the Saturday, Nov. 26 “Stars of Tomorrow II” program – the open Kentucky Jockey Club and Golden Rod for fillies that are part of the Road to the Kentucky Derby and Kentucky Oaks series which award points to the Top 4 finishers (10-4-2-1).

Sunday’s opener also features a 2017 Churchill Downs Wall Calendar giveaway to the first 5,000 in attendance, courtesy of Humana. Because it’s the day before Halloween, guests are encouraged to bring family and friends as kids 12 and under are admitted free and encouraged to wear Halloween costumes for a day of safe trick-or-treating at 15 booths set up throughout the first floor of the racetrack. Churchill Downs and community partners will hand out more than 50,000 treats provided by Mars, Inc. between 2-6 p.m.