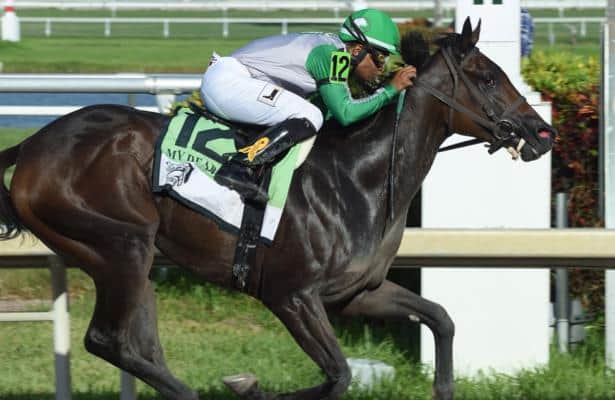 “She’s doing great. She’ll breeze again next week. We’ll leave on the 26th, and off we go,” said Gold, whose multiple stakes-winning trainee returned to the Gulfstream Park work tab last Saturday with a five-furlong breeze in 1:00.65, the third fastest of 31 recorded at the distance.

Cookie Dough is coming off back-to-back wins in the Florida Sire Stakes series, having captured the $200,000 Susan’s Girl by 6 ½ lengths at seven furlongs before successfully negotiating two turns while winning the $400,000 My Dear Girl by 7 ½ lengths at 1 1/16 miles.

“I think we haven’t seen the best of this filly yet. Hopefully, we’ll see it on the 2nd of November,” Gold said.

In the My Dear Girl, Cookie Dough was forced to race extremely wide around the first turn after breaking from the No. 12 post position and was slow to settle into stride along the backstretch under jockey Jeffrey Sanchez. Arindel’s homebred daughter of Brethren advanced along the backstretch before making a sweeping move to the lead on the far turn. She drew away through the stretch to win comfortably.

“She could have had a better trip, but she didn’t. She overcame it. She didn’t get hit with the stick. She was under a hand ride. There was plenty of gas in the tank and she came back good,” Gold said. “I was pleased, and, as I said, I don’t think we’ve seen her best race yet.”

The $150,000 Tempted (G3) at Aqueduct Nov. 2 had been under consideration before it was decided Cookie Dough had earned the opportunity to run in the Juvenile Fillies.

Horses to Watch: Cezanne is back – and better than ever
In this biweekly series, racing analyst Keeler Joh...