Contessa ends retirement, will have first starter at Big A 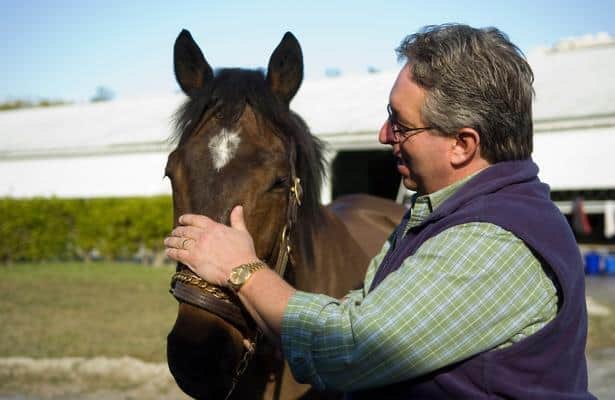 It has been just under a year since trainer Gary Contessa, a mainstay on the New York Racing Association circuit, called it quits. March 25, 2020, to be exact, was the day he walked away as a trainer of Thoroughbreds, a position he had held for 35 years.

Nothing lasts forever, and Contessa not being a trainer is one of those things. He is back and will restart his career Friday, when he runs his first horse in 363 days. And this horse might be an omen.

A 4-year-old New York-bred gelding named Trustyourinstinct will christen the comeback in the Friday finale at Aqueduct.

The 63-year-old Contessa has been hired as the private trainer for Nick and Delora Beaver’s Bell Gable Stable. He will be based at Delaware Park.

“The name fits,” Nick Beaver said about Trustyourinstinct from his home in Chesapeake City, Md. “We know Gary’s record. We know his accomplishments and how good he is. We are so glad we got him.”

Contessa will not be at Aqueduct in person for his return. He is going back to his upstate New York home in Hoosick Falls on Thursday night after spending the week at the Ocala Breeders’ Sale, where he continues to represent multiple clients. His former assistant in New York, Amira Chichakly, will saddle Trustyourinstinct.

“I’m ecstatic,” Contessa said from Florida. “I love it. Outside of my family, the horses — and my dogs — are the best things in my life. I just love sitting at my barn watching the horses and seeing what they do. I can’t wait to get back. I am really looking forward to it.”

Contessa said he will pack up his truck on Friday and, along with his wife Jennifer and 14-year-old son Raymond, will head to Delaware. His wife and son will return to Hoosick Falls after Contessa gets settled in Delaware.

Last March, Contessa left racing because he said it was getting too difficult to make a profit because of rules put in place by the New York and federal Departments of Labor. Several trainers were given hefty fines for wages they said were owed to employees.

Before the Departments of Labor got involved, most trainers would pay their help a weekly salary. The state and federal governments said employees had to be paid by the hour, and the overtime costs soared.

“The only way I could still do it in New York was to cut corners or cheat, and I wasn’t going to do that,” Contessa said.

So off he went, taking with him a career that saw him win 2,364 races. His horses, which included Grade 1 winners Sippican Harbor and Do It With Style, helped him to be NYRA’s leading trainer from 2006 to 2009. During his time, he was the leading trainer at 16 NYRA meets, most of them at Aqueduct.

Once out of the training game, he kept up his business by representing clients at horse sales.

One day about two years ago, Nick Beaver, who had his Bell Gable Stable up and running since only 2017, reached out to Contessa. He did not know him and sent him a direct message on Twitter. Contessa, who talks to anyone, immediately replied.

Beaver wanted advice. Contessa gave all that he had. The ex-trainer became fast friends with Beaver and his wife. They went to sales. They bought horses. Contessa began to manage the Bell Gable Stable after he left his training job in New York.

They are all excited about a 2-year-old colt by Flatter named Maryland Brando. The Beavers paid $250,000 for him at last October’s Fasig-Tipton Midlantic Fall Yearlings Sale.

After talking with his wife, Beaver trusted his instincts and asked Contessa if he would consider being their trainer. He never thought he would say yes. He did, and here we are.

“Nick and his wife are equally into this,” Contessa said. “No horse that ever leaves the program is going anywhere but a farm or a riding program. I have never met anyone who has loved their horses more than Nick and Delora.”

Contessa said he expects to have a barn of about 25 horses at Delaware Park. He hopes that some of his horses can be good enough to ship to Belmont Park or Saratoga in the summer for bigger races.

In the short life of Bell Gable Stable, there have been 42 wins in 299 starts and earnings of $1,151,809. The Bell Gable horses race primarily at Delaware, Laurel, Parx, Penn National, Charles Town and Colonial Downs. The Beavers have yet to win a graded-stakes race. That is a goal, of course.

“The horse is always first to me,” said Nick Beaver, who owns a contracting company (his wife owns two). “We have been married for 31 years and (Delora) is the same way. We have four dogs, three cats and the horses.”

Beaver, 52, and Delora, 54, live on a farm in Chesapeake City. They have two children, 30-year-old son Cory and 23-year-old daughter Cami, who are out of the house.

The Beavers and Contessa hope for big things.

“We are as pumped as we can be,” Nick Beaver said. “Gary is a true blessing for us. We have hit it off and become good friends.”

The Beavers are putting Contessa up in a two-bedroom furnished apartment close to the track.

The former trainer now trainer cannot wait to get started.

“When you run a public stable, the phone never stops ringing,” Contessa said. “This will be the job that will take me to my retirement. This is a very nice way to train horses, and many trainers don’t get the opportunity to do it.”