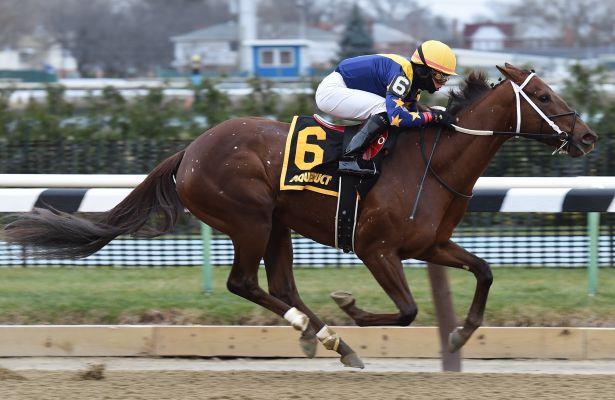 LNJ Foxwoods' local sprinting sensation Constellation will make her first start since January as the heavy favorite of four in the $125,000 Cicada for 3-year-old fillies at six furlongs on Saturday at Aqueduct Racetrack.

Earning a career-best 89 Beyer Speed Figure for a 10-length win in her first start over the Big A's inner track in the Ruthless on January 17, Constellation will look to pick up her third stakes in a row. The sophomore daughter of Bellamy Road overcame a troubled trip to finish third in her stakes debut behind the regally-bred Rachel's Valentina in the seven-furlong Grade 1 Spinaway at Saratoga Race Course.

An $800,000 2-year-old in-training purchase, Constellation came back with a runner-up effort in the Grade 2 Matron at Belmont Park in October before breaking through at the stakes level with an 8 ¼-length victory in the Furlough at Aqueduct on November 26.

Constellation will leave from the outside post 4 as the 1-9 morning line favorite with Jose Ortiz, who stands poised to win his second straight riding title for the Aqueduct winter meet.

Kiaran McLaughlin will send Shadwell Stable homebred Takrees to face Constellation as the second choice on the morning line at 6-1. The Daaher filly has hit the board in each of her three starts since beginning her career on the grass at Belmont last fall and boasts a maiden victory and a second against allowance company over the inner track.

Takrees is set to break from the rail with Kendrick Carmouche aboard.

Repole Stable's Lost Raven will cut back in distance for the Todd Pletcher barn. The Uncle Mo homebred posted a pair of victories in her first two starts, including a three-length score in the Smart Halo at Laurel, before finishing fifth in her two-turn debut in the Grade 2 Demoiselle. The Cicada will be Lost Raven's first sprint over the inner track following a third-place finish in the Busanda in January and a fading fifth last out in the Busher on February 27.

Installed at 10-1 on the morning line, Lost Raven will have the services of Manny Franco from post 3.

Joseph Lowe's recent maiden winner Anydayismyday, 20-1 on the morning line, will be ridden from post 2 by Ruben Silvera for trainer Edmund Pringle.