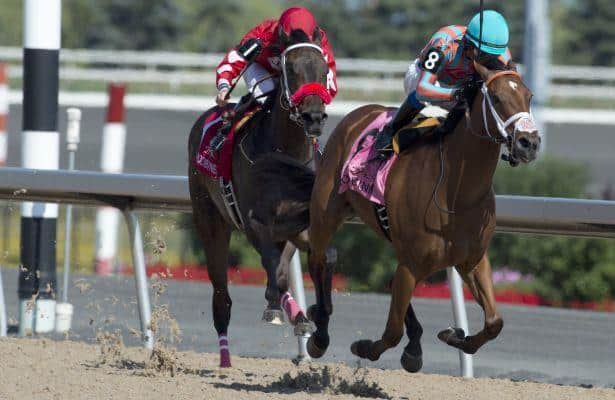 Trained by Mark Casse for owner Conquest Stables LLC., Conquest Vivi arrived at the 5 ½-furlong Tapeta sprint for Ontario-sired juvenile fillies from a ridden-out 6 ¼-length score in a maiden allowance tilt on June 12.

By Court Vision, out of the Victory Gallop dam Keen Victory, Conquest Vivi is a half-sister to the well-regarded multiple stakes winner Conquest Enforcer. Sent to post as the 3-5 mutuel favourite under jockey Patrick Husbands, Conquest Vivi dueled with Raglan Road, piloted by Gary Boulanger, through splits of :23 and :46.38 as Green Freedom, under rider Luis Contreras, tracked their early foot.

Conquest Vivi and Raglan Road separated themselves from the field turning for home and the winner, under a confident ride by Husbands, prevailed by 2 1/2-lengths.  A game and determined Raglan Road held on for place by 2 ¼-lengths over a rallying Ring in the Nite.  Conquest Vivi covered 5 ½-furlongs in 1:04.98.

Husbands was keen to get out of the gate quickly from the outside post in a field of nine fillies.

“She’s a pretty fast little filly so you just want to get across and clear the other horses,” said Husbands.

The veteran rider, who recorded his 3000th career win a week ago, is hopeful that Conquest Vivi can match the success of her older brother, Conquest Enforcer.