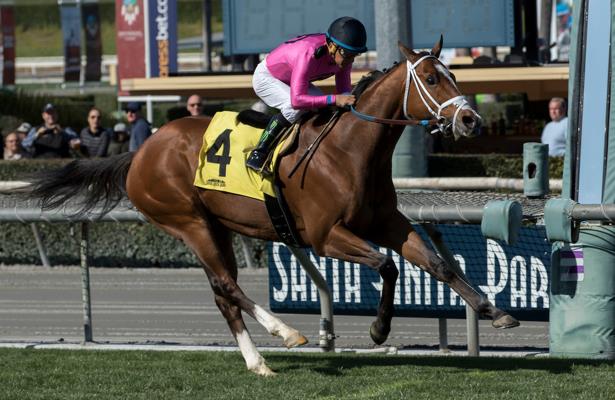 Stablemates Stormy Liberal and Calculator took the money as co-9-5 favorites, but neither were able to catch Conquest Tsunami, who broke sharpest and led every step of the way to win Saturday’s featured Grade 3, $150,000 Daytona Stakes at Santa Anita Park.

Under Victor Espinoza, Conquest Tsunami covered 6 1/2 furlongs on the downhill turf course in a final time of 1:12.03 to lead Peter Miller’s trainees, who filled out the win, place and show spots.

Behind Conquest Tsunami was the newly minted millionaire, Stormy Liberal, who was making his first start domestically since winning the 2017 Breeders’ Cup Turf Sprint, with Calculator, who opened his season with a stakes win at Santa Anita, third.

Conquest Tsunami led Calculator by a length through the downhill course's bends, with Stormy Liberal closing to a stalking position by the time they crossed over the dirt and into the stretch. But there was no catching the 2 1/2-length winner.

"This horse was sharper than a No. 2 pencil," said Miller, who suggested the winner could be off to Dubai for his next start.

A 6-year-old by Stormy Atlantic, Conquest Tsunami improved his record to 2-for-2 since escaping the wildfires that hit Miller’s barns in December at the San Luis Rey Downs training center. Overall, the bay gelding has now won eight of his 22 career starts.

"The minute I got on his back, I really had that feeling that this is a good horse," Espinoza said. "I was kind of excited."