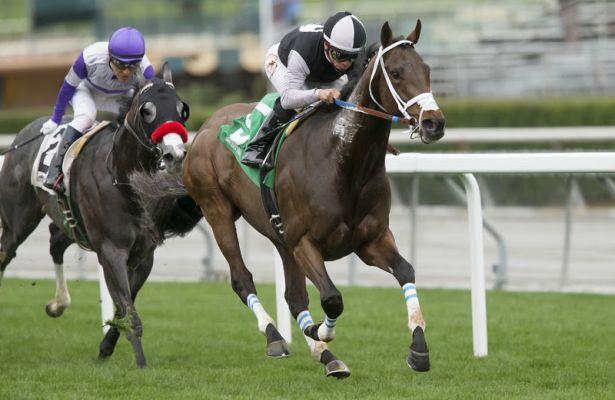 Under confident handling from Norberto Arroyo, Jr., favored Conquest Farenheit took Monday’s $75,000 Baffle Stakes by 1 ¾ lengths as he negotiated 6 ½ furlongs down Santa Anita’s hillside turf course in 1:12.83. Trained by Peter Miller, he returned to turf following a disappointing effort going a mile on the main track in his Southern California debut here on Feb. 2.

A close second to pacesetter Rockin Rudy crossing the dirt at the top of the stretch, Conquest Farenheit took command under a hand ride a furlong out and appeared full of run past the wire into the Club House turn.

“The way he galloped out, he could be a miler, who knows?” said Miller, who notched the third of what would be four wins on the day, giving him the lead in the Santa Anita trainer standings with 20 wins through 31 days of racing. “I’ve just gotta keep an open mind…I don’t want to pigeon hole him. He’s a very nice horse that’s much better on the grass.”

Owned by Chad Littlefield and Gary Hartunian’s Rockingham Ranch, he began his career at Woodbine in Toronto, Ontario Canada. In securing his first stakes win today, Conquest Farenheit is now 4-2-1-1 and with the winner’s check of $47,100, he increased his earnings to $110,045.

“I had a little concern today, he was more relaxed in his last race,” said Arroyo. “Today in the paddock, he was jumping around and doing things he doesn’t usually do…He wasn’t sweating in the post parade but when we got to the gate he did start to sweat a lot. But then, in the race, he did what he was supposed to do…It was easy for him, I didn’t even tap him.”

Rockin Rudy, who had been idle since breaking his maiden on Aug. 5, made his first start today for trainer Doug O’Neill and he hung in gamely for the place, finishing three quarters of a length in front of Elwood J. The second choice at 2-1 with Mario Gutierrez, Rockin Rudy paid $3.80 and $2.80.

Ridden by Flavien Prat, Elwood J prevailed by a nose for third over Tipo Duro. Off at 8-1, Elwood J paid $3.40 to show.

Live racing will resume at Santa Anita on Friday, with first post time at 1 p.m.