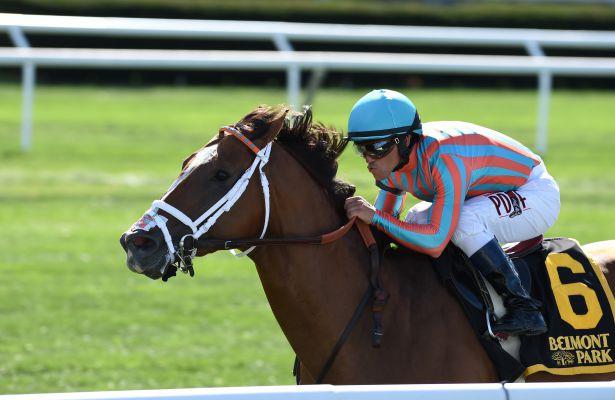 Conquest Enforcer took the lead coming out of the turn and put in a strong finish to prevail by 1 3/4 lengths in Sunday's $100,000 Allied Forces for 3-year-olds at Belmont Park.

Trained by Mark Casse, Conquest Enforcer left from the outside as the 3-5 favorite and stayed just off Too Discreet's fractions of 23:00 and 46.13 seconds before taking the lead once straightened for home.

Piloted by Javier Castellano, Conquest Enforcer hit the wire in 1:07.76 in the six-furlong sprint on the inner turf. It was the fourth win in five starts for the son of Victory Gallop.

"[There was an] inside horse with speed, so we were able to just sit off and watch," Castellano said. "With the first quarter going 23 and change, I liked the way he settled. Turning for home, he picked it up and flew in the last part. I didn't have to go to the whip. He was ready today."

Conquest Enforcer, who was making his first career start away from Woodbine, capitalized on the class relief after a third-place showing in the Grade 2 Play the King on August 20. The Conquest Stables' bay colt has made all six of his career starts in stakes company and improved to 4-0-1 overall.

"It set up perfect and Javier rode him perfect," said Randi Melton, assistant to Casse. "He sat right there, had tons of horse and showed him the whip down the lane and he just came home like we thought he would. Mark said he's not crazy about the whip, Javier just showed it to him and that was all he needed. He just took off and came home beautifully."

"He came to us not that long ago and the team in Canada does an amazing job," Melton said. "We just had to saddle him. He was ready."

The Christophe Clement-trained Too Discreet held for second, a nose ahead of Front Pocket Money.

Don't Be So Salty and Rated R Superstar completed the order of finish. Bust Another was scratched.