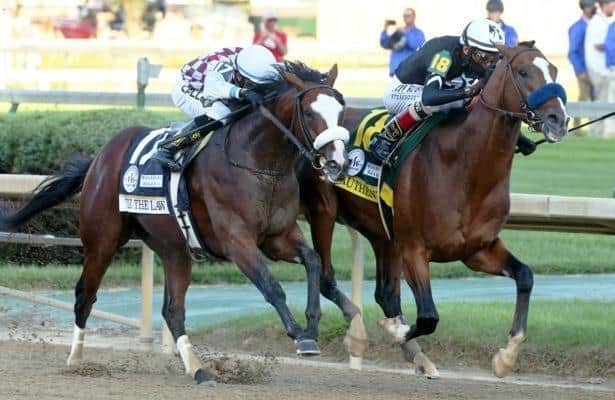 Going into the 2020 Kentucky Derby, one colt stood above the field, so clearly the favorite that longtime Derby oddsmaker Mike Battaglia was not given official credit for correctly picking the favorite when he placed him at the top of his morning line odds.

“I really thought Tiz the Law was unbeatable,” Bob Baffert, trainer of Authentic, who pulled off the upset, said after the race. “I thought, I have a good horse, but we’re stuck way on the outside.”

The loss was a tough one for 7-10 favorite Tiz the Law, owned by Sackatoga Stables. Sackatoga’s managing partner, Jack Knowlton, was disappointed with the result, but complimentary of his colt’s ride.

“Even though it didn’t turn out the way we hoped it would, certainly no shame in the race he ran,” Knowlton said, “He’ll be back. Hopefully he’ll come out of the race well and we’ll look to go onto Baltimore and hopefully win that and get some revenge.”

The second-place finish put an end to Tiz the Law’s Triple Crown hopes. After winning the Belmont Stakes and the Grade 1 Travers at Saratoga, which was run at the Derby's 1 1/4-mile distance, he was the prohibitive favorite going into the Run for the Roses.

It was that status as favorite that made the loss so disappointing for Knowlton.

“Obviously we’d hoped to win,” Knowton said. “He was a big morning line favorite, went off odds-on. But it just wasn’t to be. Authentic ran a tremendous race. It was a fast pace, and he never came back. Tiz has been able to pass horses all year and today he ran into one he couldn’t get by.”

Tiz the Law, a son of Constitution out of Tizfiz by Tiznow, is trained by Barclay Tagg, who conditioned Sackatoga’s previous Kentucky Derby and Preakness winner, Funny Cide. Ever a man of few words, Tagg summed up the loss after the race.

The Preakness Stakes is scheduled for Oct. 3 at Pimlico.