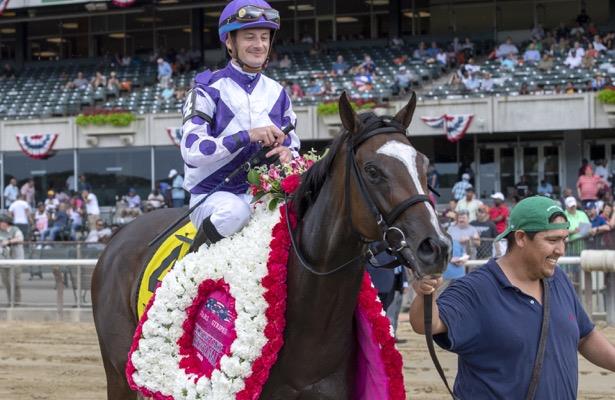 Even as plans have been set to offer Concrete Rose at Keeneland’s November Sale, her connections cling to the hope that her stellar but injury-marred racing career is not quite over.

The daughter of Twirling Candy won six of seven starts with earnings of $1,218,650 before her 3-year-old season ended prematurely last August because of a hairline fracture in her right front leg. She was on the comeback trail this past April for trainer George “Rusty” Arnold when she endured another setback, wrenching her ankle while she kicked and played after morning exercise.

“She messed up her ankle pretty good,” said Glenn “Bo” Bromagen of co-owner Ashbrook Farm. “We didn’t have to do any surgery or anything like that. We just had to give her the time.”

If all continues to go well, she is expected to walk under tack within a month. That might allow for a last hurrah before consigner Lane’s End Farm swings into action.

“I think she can make a race before the sale,” said Bromagen. Concrete Rose will be offered as a broodmare and racing prospect, so a demonstration of soundness on the racetrack certainly would not hurt their cause.

“She’s the best horse I ever bought, and I can say that partnering up with BBN was one of the best decisions I ever made. We’ve had such an amazing time with her,” he said. “If we could run her until she was 8, I would love to. This is the experience you look for in the horse business, and she’s given it to us.”

In the end, though, a prudent dollars-and-cents decision had to be made.

“We’re in the business long term,” Bromagen said. “I think she represents so much value as a broodmare to programs that can better support her than Ashbrook Farm could.”

He added: “It came down to a commercial decision as far as not missing an opportunity to capitalize.”

Concrete Rose absorbed her lone defeat in the Breeders’ Cup Juvenile Fillies Turf. Her chances may have been compromised by a yielding turf course that afternoon at Churchill Downs.

The relatively small but always determined filly went 4 for 4 as a sophomore. She came within one victory of sweeping The New York Racing Association’s Turf Tiara series with commanding scores in the $750,000 Belmont Oaks Invitational (G1) and the $750,00 Saratoga Oaks. She sat just off the lead before pouncing and prevailing by 2 3/4 lengths in the Belmont Oaks. She set the pace and drew off by 4 3/4 lengths in the Saratoga Oaks for regular rider Julien Leparoux.

A hairline fracture in her right front leg that took three sets of X-rays to detect kept her from attempting the sweep in the Jockey Club Oaks.

Bromagen indicated that Lane’s End was always his first choice to handle the sale.

“I have a longstanding relationship with Lane’s End. We’ve sold a lot of horses with them before, and that’s where we bought our mares,” he said. “I think Lane’s End is in the best position to promote her and market her and get us the best possible sales result.”