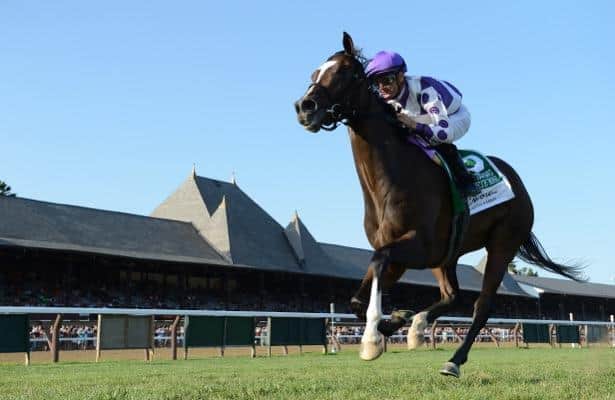 Rusty Arnold anticipated that Concrete Rose would get to the lead in Friday’s $750,000 Saratoga Oaks Invitational, and that the race would be run at a slow pace.

The 1-5 favorite Concrete Rose set an easygoing pace in the field of five, then kicked late under jockey Julien Leparoux to cruise to victory.

Now Concrete Rose can try to accomplish the Turf Tiara back at Belmont on Sept. 7 in the Jockey Club Oaks.

Arnold has Keeneland’s Queen Elizabeth Challenge Cup (G1) on Oct. 12 in mind for later this season but said Concrete Rose will “probably run” first in the Jockey Club Oaks.

“It’s going to be hard not to run her back,” Arnold said.

Wherever Concrete Rose runs next, she probably won’t get an easier trip than what she enjoyed Friday at Saratoga.

“They gave me the race in the first part of it when we went really slow,” Leparoux said. “Then after that, I controlled the race the whole way.

“She’s just got an awesome kick at the end. It would’ve been very tough to beat me today, for sure.”