Baltas is accused of doping 23 horses this spring 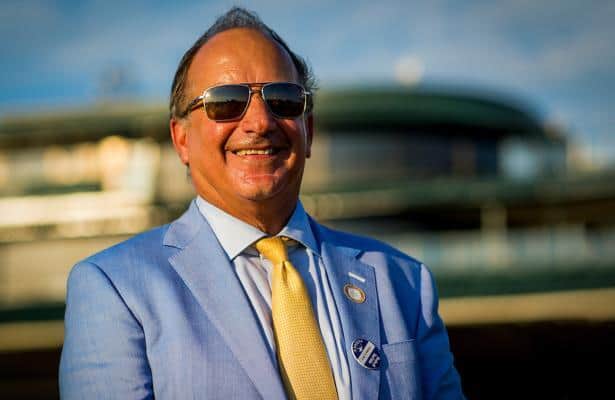 The California Horse Racing Board, which last month launched an investigation into potential medication violations by Richard Baltas, filed a formal complaint against the trainer Tuesday alleging surveillance video showed 23 horses in his care were given illegal substances on race day.

According to the complaint, the violations occurred from April 15 through May 8. It claims members of Baltas's staff at Santa Anita were seen on video administering substances that a later UC Davis analysis determined to be Higenamine and Paenol.

Baltas did no respond to phone and text messages from Horse Racing Nation Tuesday.

Higenamine, which is banned for use by human athletes, can act as a "general stimulant," according to online sources. The World Anti-Doping Agency notes "it is used as a substitute for Dimethylamylamine (DMAA) and ephedrine." Paenol is said to have anti-inflammatory and analgesic properties.

Baltas is scheduled to go before the board of stewards at Los Alamitos on July 1 at 1 p.m. EDT.

According to Equibase, Baltas started 29 horses from April 15 through May 8. That included two at Golden Gate, two at Keeneland, one at Oaklawn Park, one at Churchill Downs with the rest at Santa Anita. He had six winners and seven runner-ups.

On May 12, Baltas was "temporarily suspended" from entering horses at Santa Anita or any of its sister tracks pending the completion of an investigation into alleged medication violations by parent company 1/ST Racing. At the same time, the CHRB also launched its own inquiry into the matter.

Four days earlier at Santa Anita on May 8, Baltas's runner Noble Reflection was a late scratch by order of the stewards prior to the tenth race due to what sources told Horse Racing Nation was a violation of raceday medication protocols. That came one day after another Baltas' runner, Speedcuber, suffered a fatal injury near the eighth pole of a maiden special weight race on dirt at Santa Anita.

Baltas operated one of the bigger stables in Southern California before the recent troubles. A majority of the horses previously under his care have already been transferred to other trainers. George Papaprodromou gained the bulk of the barn, as he currently has about 50 former Baltas' horses in his care.

Baltas remains eligible to start horses outside of tracks owned by 1/ST Racing. He currently has no entries for the week, according to Equibase. Since 1/ST Racing took its own in-house action against Baltas last month, he has started seven runners at Churchill Downs and won once.