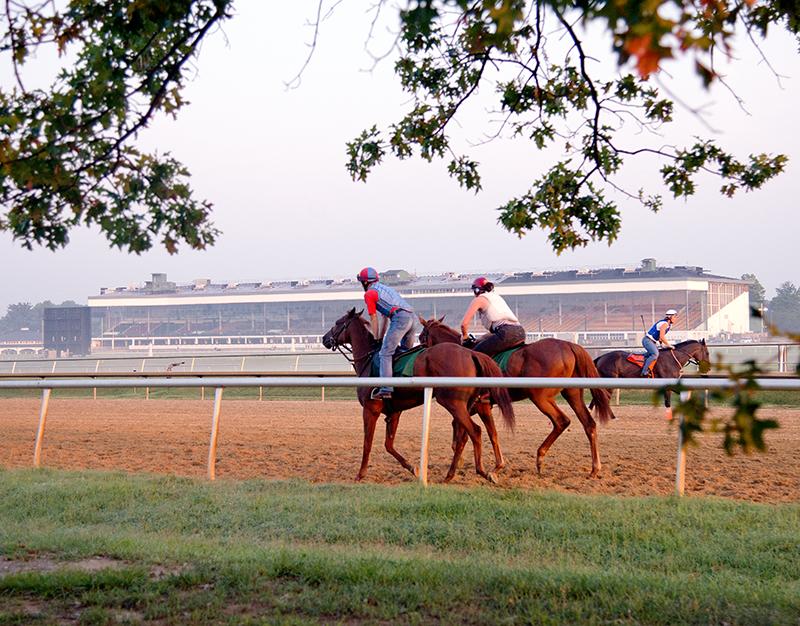 In a rare circumstance, no previous winner or defending champion returns in Saturday’s $150,000 Maryland Million Classic at Laurel Park, leaving a wide-open and competitive field of seven to contest the richest race on the 35th annual Jim McKay Maryland Million program.

The 1 1/8-mile Classic for 3-year-olds and up headlines a 12-race card featuring eight stakes and four starter stakes on "Maryland’s Day at the Races," celebrating the progeny of stallions standing in the state. First race post time is 11:25 a.m. ET.

With 2019 victor Forest Fire sitting this one out, 2020 marks just the sixth time in the past 23 years and only the ninth in event history that the Classic will not have either the previous year’s winner or a past champion in the lineup.

G.J. Stable’s Prendimi made his Laurel debut in last year’s Classic for trainer Luis Carvajal Jr., who missed the race to be in California for the Breeders’ Cup with Imperial Hint, only to have the multiple Grade 1-winning millionaire scratched the morning of the Sprint (G1) with a minor foot issue.

“It’s very nice to have him in my barn. I used to gallop the mare, and now we have this guy. Every baby she brings is a good horse, and Prendimi has never disappointed me,” Carvajal said. “The first time I ran him at Laurel, he definitely didn’t disappoint me. Unfortunately last year I couldn’t be at Laurel because I was at Santa Anita for the Breeders’ Cup. This year Imperial Hint is retired so there’s no Breeder’s Cup for me, but it will be nice for me to be at Laurel for the Maryland Million.”

The 2019 Classic was not only Prendimi’s first time at Laurel, it is the only other time the 5-year-old Dances With Ravens gelding has been nine furlongs. Daniel Centeno is named to ride from Post 1.

“I’m looking forward to it. Last year we didn’t have much of an idea of if he was going to like the track or if he was going to be able to handle the mile and an eighth. There was a question mark there,” Carvajal said. “But, he did great and I was really happy with the way he ran. I’m hoping that he can perform the same way. He’s doing great. He’s working good for this race, so I’m very anxious to see him run again at Laurel.”

Prendimi has been third or better in 16 of 23 lifetime starts with five wins, including a trio of stakes wins at Carvajal’s spring/summer base of Monmouth Park. Most recently, he was seventh in the one-mile Salvator Mile (G3) on Sept. 20 after winning the Charles Hesse III Handicap on Aug. 30 at the New Jersey track.

“My client, the first thing he told me when we came to Monmouth Park this spring, he said, ‘We have to look forward to the Maryland Million Classic.’ It was the first thing he had in mind,” Carvajal said. “The horse did very well in the summer. We hope it’s a beautiful day and he runs as good as he did last year.”

“Before the last race I expect him to run really good because he was showing me in the mornings that he was doing better than ever,” Gonzalez said. “Every race he gets better and better. I didn’t know if he could [win], but I knew he was going to be there and he ran so good. He came out of the race good, he breezed good the other day and came out of it good, so everything’s good.”

Among the horses Harpers First Ride defeated in the Pimlico Special were defending champion Tenfold, another Triple Crown race veteran in runner-up Owendale, and Cordmaker, third by two necks in the 2018 Special. Angel Cruz gets the return call from Post 5.

“The Pimlico Special is a very big race,” Gonzalez said. “It was very special because it’s here in Maryland. This is where I have my license and make my home. It was special for everybody. The whole team was happy that day.”

BB Horses’ Tap the Mark registered a win on the Special’s undercard, a half-length optional claiming allowance triumph going 1 1/16 miles over Toughest ‘Ombre and Tattooed. Weston Hamilton has the assignment from Post 6.

“He’s a horse that tries all the time and is always right there. He’s made almost $200,000 already and he’s more mature. He’s a big horse and I think he can run the long distance. He’s the kind of horse that can run right there with the speed and he’s an easy horse to ride,” Gonzalez said. “This is a big day for everybody. It [would be] very special for us to win one race, especially the Classic. We are going to give it a try.”

Cash is King and LC Racing’s Monday Morning Qb, based at Parx with trainer Robert E. "Butch" Reid Jr., has raced twice previously at Laurel, winning the Heft Stakes as a 2-year-old last December and running second in the Federico Tesio on Sept. 7. The Tesio was the Imagining colt’s first race in seven months and came at the Classic’s distance.

Monday Morning Qb will try to join exclusive company Saturday. Bonus Points in 2017 is the only other 3-year-old to win the Classic.

“He obviously handles the dirt very well, and a firm dirt is what I’m looking for. He likes that track down at Laurel so we’ll give it a shot,” Reid said. “We feel like he’s sitting on a good race. He breezed beautiful the other day. We just let him kind of stretch his legs and blow off a little steam, and it should set him up perfect for this spot.”

Monday Morning Qb made his turf debut following the Tesio, racing in contention for a half-mile before fading in the one-mile James W. Murphy on Oct. 3 on the Preakness (G1) undercard at Pimlico.

“He caught a real soft turf course that day and he’s a big, heavy horse. I think it really compromised his chances in there,” Reid said. “He came out of it like he didn’t even run, and he really didn’t, so that’s the reason why we don’t mind running him back a little quicker for this spot.”

Hillwood Stable’s Cordmaker has gone winless in five 2020 starts but has shown steady improvement since his belated season opener on July 3. The gelded 5-year-old son of Hall of Famer Curlin was second in the Deputed Testamony and third for the second straight year in the Pimlico Special, beaten less than six lengths combined. Regular rider Victor Carrasco has the mount from Post 4.

The Elkstone Group’s homebred Top Line Growth takes a perfect 4-0 record at Laurel into the Million. A 4-year-old Tapizar gelding, he finished a rallying second in the Salvator Mile last out snapping a two-race win streak. Promoted winner of the Iowa Derby last July, he capped his sophomore season with a second-level optional claiming allowance win at Laurel, then made a successful return off an 11-month layoff in a third-level spot on Aug. 14. Julian Pimentel rides from Post 7.