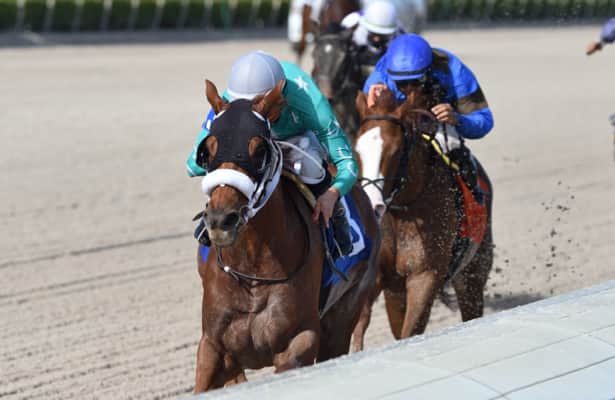 Competitive Speed, a bargain $5,000 juvenile purchase turned stakes winner in less than a year, will put her three-race win streak on the line when she tries graded company for the first time in Saturday’s Grade 3, $100,000 Forward Gal at Gulfstream Park.

The 39th running of the seven-furlong Forward Gal for 3-year-old fillies is among five graded-stakes worth $600,000 in purses on a 12-race program highlighted by the $200,000 Holy Bull (G3), Gulfstream’s next step for 3-year-olds on the road to the Florida Derby (G1).

A chestnut daughter of Competitive Edge, a Grade 1 winner at 2, and granddaughter of 2003 champion older horse and Horse of the Year Mineshaft, Competitive Speed failed to meet her reserve as a yearling in the fall of 2019 and was sold as a 2-year-old in training last July. She debuted in the slop at Gulfstream Park West in October, finishing sixth in a six-furlong maiden special weight, but hasn’t lost since.

“This is going to be a big test, but I think she can make it. She’s doing good and she is one of those horses that is never going to make you look bad,” he added. “I think she’s going to run a very good race.”

Competitive Speed, owned by John Minchello, graduated by 1 1/2 lengths in a 6 1/2-furlong maiden claimer at Gulfstream West less than two weeks after her unveiling, beating a pair of next-out winners in the process. She made her Gulfstream debut Dec. 6, coming from off the pace to take a starter optional claimer by 4 1/2 lengths, then stepped up to stakes company in the 6 1/2-furlong Glitter Woman Jan. 2.

Once again, Competitive Speed was able to rate under regular rider Leonel Reyes before taking a short lead at the top of the stretch and going on to win by three lengths and give Gonzalez — a multiple group stakes winner in Puerto Rico, including the 2013 Clasico Ano Nuevo (G1) — his first stakes triumph in the U.S.

“That was very special. I came here two years ago and was working hard to find a good horse. You never know which one is going to be the one,” Gonzalez said. “I was looking and waiting because then people start to look at you with respect. She is doing so good. She will always have a big, big space in my heart.”

Competitive Speed has breezed twice at Gulfstream West since the Glitter Woman, including a half-mile in 48.40 seconds Jan. 16, third-fastest of 18 horses. Reyes will ride back from Post 3 in a field of eight.

“It was a little bit faster than I wanted but she came back good. The next day she ate everything and she was happy,” Gonzalez said. She’s coming into the race really well.

“She’s very quiet in the stall. If you pass by her you would never know she was there,” he added. “When she won the stake, one of the exercise riders saw her and asked, ‘Which horse is this one?’ She’s a really nice horse.”

The one horse that beat Competitive Edge, Coach Jer’s Joy, returns for the first time since her Oct. 31 debut. Owned by Legacy Racing and trained by Saffie Joseph Jr., the Palace filly has breezed seven times at Palm Meadows, Gulfstream’s satellite training facility in Palm Beach County, for her return. Irad Ortiz Jr. has the mount from outside Post 8.

“She was very impressive in her debut and she’s trained great since then,” Pletcher said. “Ideally, I’d kind of like to run her in an allowance race, but we don’t really have an option at the moment. Considering how well she ran at the distance and over the surface here, we’ll give it a try. The seven furlongs was no problem in her debut.”

Luis Saez, up for her debut, gets the return call from Post 7.

Rounding out the field are Queen Arella, a maiden special weight winner in debut last May at Gulfstream but off the board in back-to-back stakes in New York; last-out maiden winner Three Tipsy Chix; Wholebodemeister, who also broke her maiden last summer at Gulfstream and is trying stakes company for the third time; Dial to Win, fifth in the Glitter Woman; and Lady Traveler, runner-up in Rags to Riches last fall in Kentucky for trainer Dale Romans.