Competitionofideas mows them all down in American Oaks win 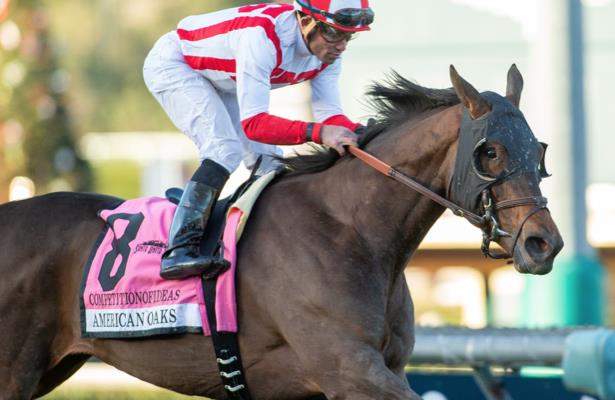 Each of those connections had huge seasons, with the final exclamation point delivered as the Speightstown filly gobbled up ground, going last to first to win while finishing 1 1/4 miles in a flashy 1:59.77.

When it looked as if the American Oaks would be decided between a matchup longshot K P Pergoliscious and Amandine, who was running back from a stakes win on three days’ rest, Competitionofideas emerged showing a major turn of foot, swallowing them both up in deep stretch.

"I thought I was going to be a little closer," Rosario said. "She broke well, and then everybody was going to get a spot. I just let her be happy where she was, saved a little ground...and then tried to make one run after that."

Competitionofideas rallied off a half mile in 47.86 seconds, three quarters in 1:11.95 and a mile in 1:35.84 in a field of eight sophomore fillies. She never got too far behind -- about eight lengths separated the field going into the turn -- but she didn't really begin rolling until straightened out.

Off at 5-1, Competitionofideas returned $12.20 to win. Californiagoldrush broke as the 2-1 favorite but missed the board.

Brown has shipped seven horses to Southern California over the last month, with three of those now Grade 1 winners. His latest, Competitionofideas, has come around quickly. It took the $325,000 purchase four starts to break her maiden, and this, her eighth race, marked the filly's graded stakes debut.

“It’s great to finish out the year like this," said Jose Hernandez, Brown's assistant. "This filly had settled in real good here at Santa Anita and she was doing good coming into this race. She finished up really strong today.”

Klaravich Stables could be in contention for an Eclipse Award for leading owner, while Rosario is red-hot in his full-time return to Southern California. As for another memorable connection to 2018, Competitionofideas was bred in partnership by John D. Gunther, who's also behind the Triple Crown winner Justify.

Here are the latest movers in our 2021 Kentucky Derby rankings
Impressive recent wins from Life Is Good, Red Flag...