Comma to the Top Looks Like a Million Bucks in Daytona 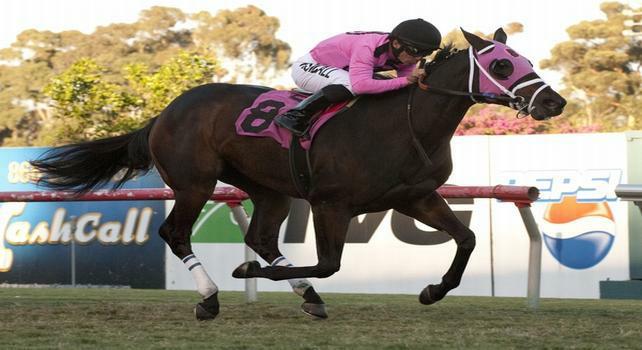 Sent from the gate through blistering fractions of 21.78, 44.16, 1:08.25 and coming home 6 ½ furlongs on a wet-fast main track in 1:14.55, 1 ¾ lengths in front of Clubhouse Ride and Aaron Gryder, Comma to the Top, with replacement rider Edwin Maldonado aloft, became racing’s newest millionaire in winning the Grade III, $100,000 Daytona Stakes Saturday at Santa Anita.

“Words can’t describe a horse like this,” said winning trainer Peter Miller, who has had the horse throughout his entire career. He’s gone through so much, but he wants to beat you. He’s just an iron horse. He’s a $22,000 gelding and you wish you had a barnful of them. He makes training easy. He tries every time. He just wants to please you.”

Comma to the Top, who was purchased out of an Ocala, Florida 2-year-old in training sale for just $22,000, again displayed ample gameness and versatility in winning the Daytona, which was originally scheduled to be run at 6 ½ furlongs down the hillside turf course.

In addition to the change in surface, necessitated by day-long rain, Comma to the Top adjusted to a late rider change, as he was originally scheduled to be handled by veteran Corey Nakatani, who was forced to take off his remaining mounts Saturday due to a spill in the fourth race.

“With the speed scratching (original morning line favorite, Great Mills), we felt we would go for the lead and it worked out good,” said Maldonado, who picked up his third win of the day with Comma to the Top. “I felt I had a ton of horse under me at the end. The horse drifted out late, but the middle of the track was the hardest part of the track.”

A close second in the 2011 Santa Anita Derby, the 4-year-old Florida-bred gelding was a winner of the restricted one-mile Big Bear Handicap at Santa Anita on Oct. 21, and was a solid fourth, beaten only 1 ½ lengths, in the six furlong Grade III Vernon O. Underwood Stakes at Betfair Hollywood Park on Dec. 2.

Clubhouse Ride, the longest shot in the five-horse field at 14-1, was just up to edge Ain’t No Other and Juan Hernandez for the place, returning $7.40 and $3.40.

Ain’t No Other, who pressed the winner early, finished three-quarters of a length in front of 8-5 favorite Capital Account and David Flores, and paid $3.00 to show.

“He broke good,” said Flores of the favorite. “The pace was fast, they just never slowed down in front of us.”