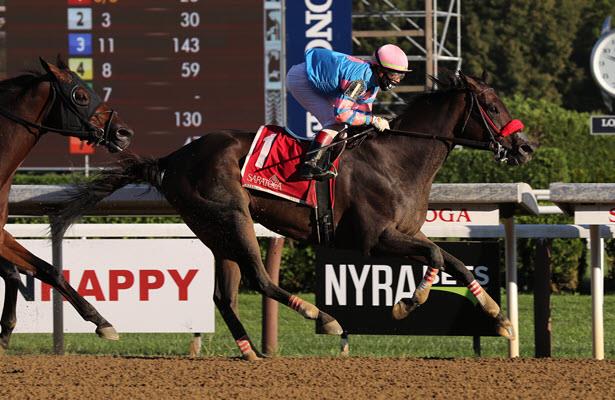 Blue Devil Racing Stable’s Come Dancing will be making the final start of her illustrious career in the $1 million Breeders' Cup Filly & Mare Sprint on Nov. 7 and continues to train up to her swan song in good order, trainer Carlos Martin said Sunday.

Slated to ship to the race's site at Keeneland on Tuesday, Come Dancing registered a final workout on Saturday, going four furlongs in 48.89 seconds on the Belmont Park dirt training track. Martin said it was an easier work than her five-furlong bullet breeze in 58.80 on Oct. 15 over Belmont's main track with Irad Ortiz Jr. aboard.

"I thought her work on the 15th with Irad was sensational, and we took our foot off the gas pedal a little yesterday since she's leaving on Tuesday morning," Martin said. "We just wanted to have a nice, maintenance-style work. I told our exercise rider, who has been with Come Dancing for the last six months — and he does a great job — that I wanted to go between 48 and 49 (seconds). For not having a walkie talkie like a lot of modern day trainers, he did great and hit it right on the money. I was pretty pleased. She came home in 24 1/5 and she didn't draw a breath, so it was good."

Come Dancing has given Martin and her connections plenty of exciting memories, capturing six stakes wins and five graded stakes triumphs for a career that started with a debut victory in November 2016 at Aqueduct Racetrack. Now 6 years old, the Malibu Moon mare won four graded stakes in 2019, capturing the Grade 1 Ballerina at Saratoga as well as a pair of Grade 2s at Belmont in the Gallant Bloom and Ruffian, along with the Distaff Handicap (G3) at the Big A, for which she earned a 114 Beyer.

"It's exciting. She's been such a great mare for us and has had such a great career," Martin said. "We're going to miss her, but it's time. She's done enough. Hopefully, she can go out on a championship note and show how good she is on the biggest stage. We're excited about it. Hopefully, it will be one of her best races in her great career."

Come Dancing is 9-3-0 in 18 career starts, with earnings of more than $1.18 million. She now will try to give Martin his first career win in a Breeders' Cup while getting a second chance at the Breeders' Cup Filly & Mare Sprint after running sixth in last year's edition at Santa Anita.

"She's been a special horse and a fun horse to have, so when she's on our game, she's an elite sprinter," Martin said. "We're going in a little fresher to it this year with a little different approach by design. We'll be there and get over the track, and I think she'll have every opportunity to fire her best shot."

Come Dancing enters the Breeders' Cup off a 3/4-length score in the six-furlong Honorable Miss (G2) on Sept. 6 at Belmont, earning a year-best 95 Beyer one race after finishing fourth, three lengths back to winner Serengeti Empress, in the Ballerina on Aug. 8 at the Spa.

"She's a professional, and not too much bothers her," Martin said. "She's been special since Day One and has had to overcome a lot of adversity. For her to be, as a 6-year-old, still winning graded stakes and just being beaten by a few lengths in the Grade 1 Ballerina, she still has the heart and the will of a champion. It would be nice to make her an official champion and an Eclipse Award winner. She's our champion, and that's why I always refer to her like that when I do social media. If anyone deserves to have that title, it's her. She's definitely a top mare."