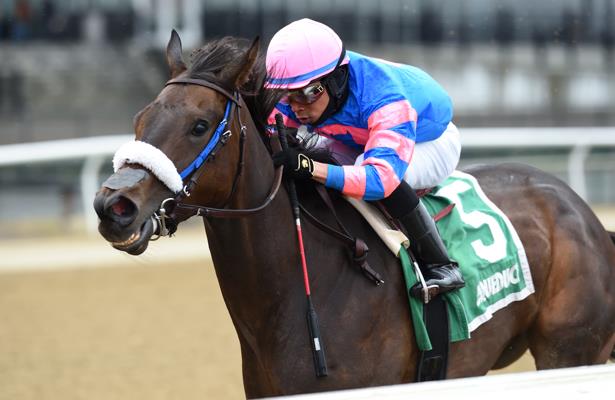 Come Dancing, temporarily under the tutelage of Hall of Fame trainer D. Wayne Lukas, is likely to make her 2020 debut in Oaklawn Park's Apple Blossom Handicap (G1) on April 18.

The shift to Lukas from trainer Carlos Martin is another twist caused by the coronavirus pandemic. The 6-year-old mare was able to ship to Oaklawn, but none of the human members of her team could accompany her.

Lukas said Martin "had to look at who was here and who could train her to run in the Apple Blossom."

The 1 1/16-mile Apple Blossom would be the first trip around two turns for Come Dancing, whose last outing was a sixth-place finish in the Breeders' Cup Filly & Mare Sprint (G1) in November. She hasn't won at this distance since a September 2018 race at Belmont Park.

Come Dancing, owned by Blue Devil Racing Stable, has a record of 14: 8-2-0 and winnings of $1.1 million. Before her November outing, she had wins in the 6 1/2-furlong Gallant Bloom Handicap (G2) at Belmont and the 7-furlong Ballerina (G1) at Saratoga. Other stakes wins came in the Ruffian (G2) at Belmont in May and the Distaff Handicap (G3) at Aqueduct in April.

Also under consideration for Come Dancing's next race was the six-furlong Count Fleet Sprint Handicap (G3) on April 18, also at Oaklawn.

That is the plan "if she wasn't tight enough and her conditioning didn't move forward," Lukas said. "I think we're all on the same page that the Apple Blossom is the right one."

Lukas said Martin "has been a great help. We talk every day, he's been super. He sent one in excellent shape ... all you've got to do is keep her happy."

As for what might follow the Apple Blossom, "that's a tough question for anybody that owns a racehorse right now," Lukas said. But he expects she most likely will ship to New York if racing is up and running.

He added that the efforts being made at Oaklawn to protect those at the track from the coronavirus are "eye-opening."

"They're doing a great job here of keeping this thing under control," he said. "A great job of screening in the morning and testing everybody. ... They've done a nice job."