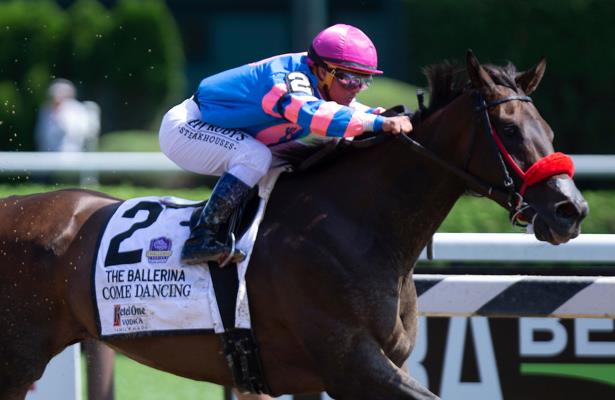 The seven-furlong Ballerina for fillies and mares 3 and up is a "Win and You're In" race for the Grade 1 Breeders' Cup Filly & Mare Sprint in November at Keeneland. Last year's Ballerina was the third graded victory in four starts for Come Dancing, and first in Grade 1 company. She ran sixth in the Breeders' Cup.

With Hall of Fame jockey Javier Castellano aboard, Come Dancing was timed in 1:00.82 over the main track in her second work since arriving in Saratoga. She went another five-eighths in 1:00.44 on July 21.

"I thought it was really good," trainer Carlos Martin said. "Javier got her to relax this morning. She went in 23 and 4, a minute and two, just cruising. She cooled out and didn't turn a hair, so we're optimistic that we can defend our title on August 8."

With options limited due to the coronavirus pandemic, Come Dancing was sent to Arkansas for her season debut in April, finishing far back in the Grade 1 Apple Blossom. The 6-year-old daughter of Malibu Moon was second as the favorite in her most recent effort, beaten 1 ¾ lengths by Victim of Love in the Grade 3 Vagrancy going 6 ½ furlongs on June 27 at Belmont Park.

Martin is pleased with the way his stable star is coming up to the Ballerina, with works very different from the two bullets Come Dancing fired ahead of the Vagrancy. He is also anxious to have her back in Saratoga where she is 2-for-3 lifetime.

"She had gone real fast before the Vagrancy, and it was kind of a funny race with the track. It kind of rained, stopped raining, and rained right before the race," Martin said. "The filly that won the race, everybody thinks she drifted but I think [jockey Jose] Lezcano wanted to be out there. We wound up going to the inside. I didn't think it was a bad effort. Of course, I'm disappointed that she got beat, but she loves Saratoga and she's been thriving up here. We'll see what we can do."

If more aggressive heading into her previous start, Come Dancing has settled back into a more predictable training pattern ahead of the Ballerina, Martin said.

"She fooled us twice, she never did that before," Martin said. "She's a 6-year-old mare, she knows her job. We slowed her down with the regular boy the last two works. I told Javier [today], 'Just trick her and get her off the inside and just keep her in the middle of the track and then bring her in a little bit,' and that's what he did. She looked good. She was just on cruise control. At this point, mentally and physically is the main thing with these older mares."