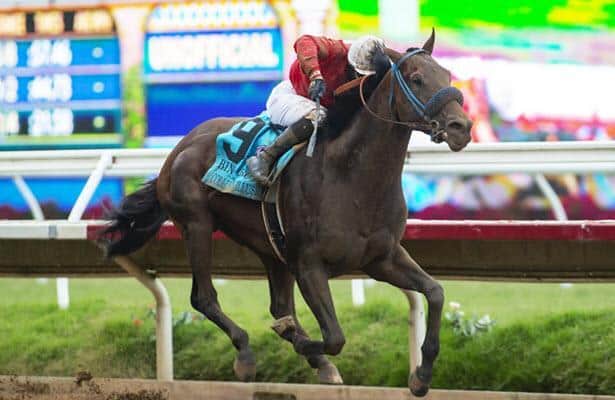 Collusion Illusion will not defend his title in the Bing Crosby (G1) on Saturday as the 4-year-old was scratched by trainer Mark Glatt.

Collusion Illusion, who won last year's Bing Crosby by a head, "grabbed a quarter" during training Friday and it left him "less than 100 percent today," Glatt told Horse Racing Nation on Saturday.

"We elected to stay conservative and wait for another day," Glatt said. He added the Twirling Candy colt will likely be re-routed to the $100,000 Green Flash (G3) sprinting on turf on Aug. 21.

Collusion Illusion was the 4-1 fourth choice on the morning line for the Bing Crosby, which now has a field of eight set to go postward. Glatt will not be without a starter, however. He also entered Dr. Schivel, who will look to match his stablemate's feat by winning the Bing Crosby as a 3-year-old, and Law Abidin Citizen (12-1). Dr. Schivel won last year's Del Mar Futurity (G1) and returned from a more than a nine-month layoff June 18 to win a second-level allowance at Del Mar.

C Z Rocket is the 5-2 morning-line favorite for trainer Peter Miller. After 26 previous starts, this will be the 7-year-old gelding's first time racing without Lasix.

Post time for the Bing Crosby is scheduled for 9:36 p.m. EDT.