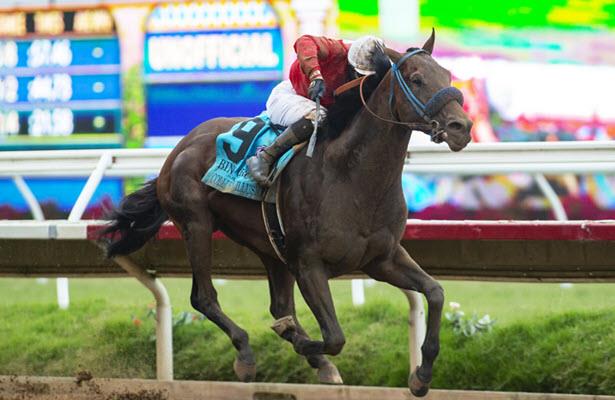 Collusion Illusion, a 3-year-old facing elders, sat off a hot pace and then rode the rail through the stretch to score as the 9/5 favorite in Saturday's Grade 1, $250,000 Bing Crosby Stakes at Del Mar, earning an all-expenses paid berth into the Breeders' Cup Sprint later this year at Keeneland Race Course.

In a field reduced to eight with the scratches of expected favorite McKinzie and P R Radio Star, there was a five-horse scramble for the early lead through sharp fractions of :21.58 and :44.78 for the opening half mile with longshot Anyportinastorm on the rail, 7/2 second-choice Fashionably Fast in the middle of the wall of horses and Wildman Jack racing five wide.

Meanwhile, Collusion Illusion and eastern shipper Lexitonian -- who was a gate scratch in last weekend's Grade 1 Vanderbilt at Saratoga -- were content to save ground off the pace.

With Anyportinastorm the first of the pace-setting quintet to falter, it was Wildman Jack who managed to secure the clear lead at the head of the stretch. However, at about the three-sixteenths pole, Flavien Prat aboard Collusion Illusion dove onto the rail and they surged to the front just as Lexitonian was unleashing his bid widest of all.  Lexitonian continued to close fast on the leader inside the sixteenth pole, but it was too late as Collusion Illusion just held on to prevail by a nose.

Tough-luck Lexitonian finished 1 1/4-lengths clear of Law Abidin Citizen, who got past Wildman Jack late. Collusion Illusion paid $5.80 as the popular winner after completing six furlongs on a fast track in 1:10.41.

“It set up nicely for me -- they were going fast up front, I could feel it," Prat said. "My horse was handling the dirt well today, too. Better than he usually does. When we turned for home I had horses in front of me and I was aware the inside was playing fast today so I went down there. I got through and at the eight pole I thought I was going to be an easy winner. Then I saw that horse on the outside (Lexitonian) coming and I wasn’t so sure. But we got there.”

Collusion Illusion is owned by Washington residents Dan Agnew, Rodney Orr, Jerry Schneider and John V. Xitco. The lightly-raced son of Twirling Candy improves his record to 5-for-6 -- which includes wins in last year's Best Pal (G2) at Del Mar, and most recently the June 20 Lazara Barrera (G3) at Santa Anita. The only blemish on the record came in last fall's American Pharoah (G1) at Santa Anita Park when he was eased.

"(Collusion Illusion) doesn’t like dirt in his face and the way it set up he was going to have to go extremely wide to stay away from it, but the past couple days the rail has been getting better as a place to be," Glatt said. "When he darted to the rail, I knew he was going to be coming. I got a little worried if he was going to find a place to go, but he was able to and came through in the end.”

Glatt also prospected Collusion Illusion, as he signed the ticket as agent on a final bid of $300,000 at last year's OBS April 2-year-olds in training sale.