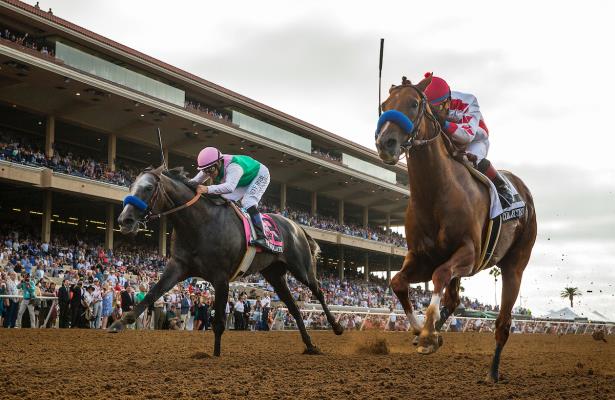 Collected, who led Horse of the World Arrogate on a merry chase in winning the Pacific Classic on Aug. 19, worked six furlongs Saturday morning for the Breeders’ Cup Classic on Nov. 4 in 1:12.80 under jockey Martin Garcia.

“I’m very happy with it,’ trainer Bob Baffert said. “It was very nice. He needed it.”

Collected is one of four Baffert trainees being considered for the Classic, along with Arrogate, West Coast and Awesome Again Stakes “Win and You’re In” victor Mubtaahij.

FINISH LINES:Mario Gutierrez is at Belmont Park today, riding maiden Bahamian for Reddam Racing and trainer Simon Callaghan in the Grade I Champagne for two-year-olds at a mile, and Reddam’s Smarty Jones winner Pavel for Doug O’Neill in the Grade I Jockey Club Gold Cup at a mile and a quarter. On Sunday, Gutierrez rides She’s a Warrior for Peter Eurton in the Grade III Ballerina Stakes at Hastings Racecourse in Vancouver, Canada.

Tiago Pereira has been suspended three days (Oct. 13, 14 and 15) for causing interference on The Street Fighter in Thursday’s fourth race, resulting in the disqualification of his horse from second to fifth, but agent Patty Sterling said she is going to appeal the ban.

The Barretts Fall Yearling and Horses of All Ages Sale will be conducted Tuesday, Oct. 17 at Fairplex Park. “Game time” is 11 a.m.

There will be holiday racing this Monday when Santa Anita offers another of its popular Dollar Days. Beer, soda and hot dogs will be on sale for a buck apiece. First post time is 12:30 p.m. Admission gates open at 10:30 a.m. Santa Anita will be dark Tuesday, Wednesday and Thursday. Live racing resumes 1 p.m. on Friday, Oct. 13.