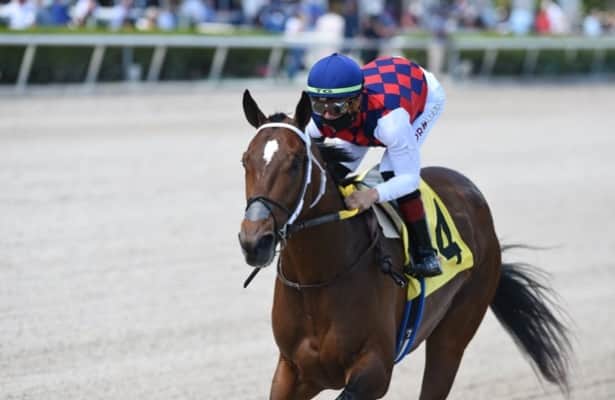 Collaborate, an eye-catching 3-year-old maiden winner on Saturday’s Fountain of Youth day program at Gulfstream Park, might have run himself onto the Triple Crown trail.

Trainer Saffie Joseph Jr. said Sunday morning that the sophomore son of Into Mischief, also bred by Three Chimneys, is likely to make his next start in the $750,000 Florida Derby (G1) on March 27.

“Off [Saturday’s] race, we’re probably going to take a chance somewhere,” he added. “We feel like he’s a Derby horse. I know we’re a little behind schedule, but with the ability he has he can probably overcome it.”

Collaborate broke sharply and set a measured pace under jockey Tyler Gaffalione, going in splits of 23.72 seconds, 46.57 and 1:11.12 before beginning to edge away from his 10 rivals. He hit the stretch six lengths in front and kept rolling to win by 12 1/2 at the end in 1:36.35 for one mile over a fast main track.

Collaborate also went off as the favorite for his debut, a six-furlong maiden special weight Feb. 6, where he endured traffic problems after getting away poorly and wound up sixth though beaten just 1 1/14 lengths.

“He was off a tad slow, took a lot of dirt, had to split horses, had to wait, (but) I thought the experience first time out was priceless,” Joseph said. “It hurt getting him beat, but if you draw the positives from the race it was priceless experience and it carried over to yesterday. He stretched out to a mile for the first time and he got a fairly easy race, which, in hindsight, I don’t mind because his first race I thought was a pretty hard race on him.”

Joseph made his Triple Crown race debut last fall with Ny Traffic, owned by John Fanelli, Cash is King, LC Racing, Paul Braverman and Team Hanley. Runner-up in the Louisiana Derby (G2), Matt Winn (G2) and Haskell (G1), he finished eighth in the Derby and ninth in the Preakness.

“It’s very exciting to have the owners that we have providing these horses to us. We’re thankful,” Joseph said. “The horses will make good trainers, and we’ve got some really quality horses now and we’re thankful for each and every one.”