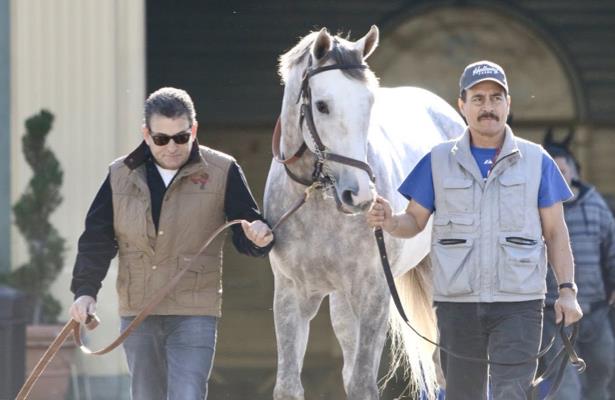 Was Coliseum a one-race wonder, or will a change of scenery bring back out the talent showcased Nov. 17, 2018, in his 6 3/4-length debut victory at Del Mar?

“Give him a couple races and I’ll be able to answer that with more certainty,” quipped Jimmy Bell, head of Godolphin’s U.S. operations.

Now 4 years old, the Godolphin homebred Coliseum has moved from trainer Bob Baffert to Brad Cox’s care, resuming training at Oaklawn Park, where he could return to the races later this spring.

The gray son of Tapit sparked Kentucky Derby dreams with that big first out performance but couldn’t come close to matching it in subsequent starts. He missed the break and didn’t factor in Santa Anita’s 2019 Sham Stakes (G3), then ran a non-threatening third in last year’s San Vicente Stakes (G2).

Throughout his time with Baffert, Coliseum was known as a bit of a head case, and the Hall of Famer tinkered with changes trying to find the winning combination. Given time off last year, Coliseum returned to the work tab but never ran again with Baffert.

“He’s just been with Brad a short period of time — getting acclimated to Oaklawn,” Bell said. “He should be breezing here fairly soon. He’s just sort of getting his foundation and miles under his belt. We’ll give him a go there.”

In the meantime, Coliseum was gelded, and that often assists in focusing a racehorse on his task. Once ready to be entered, Coliseum will fit a number of allowance conditions at Oaklawn.

“Obviously, you’ve got to have a lot of ability to show the brilliance that he did,” Bell said, looking back to the debut. “He’s a very gifted athlete from just the way he moves and his efficiency, but it takes more than athleticism. That’s what we’re looking to find out.”