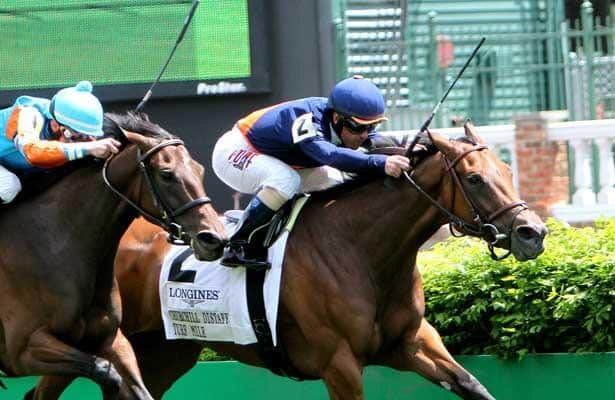 A perfect 3-for-3 during her 2014 campaign, Amerman Racing's multiple graded stakes winner Coffee Clique will look to get back to last year's form as she takes on 12 rivals in the 38th running of the Grade 3, $200,000 Athenia Stakes at Belmont Park.

Coffee Clique's 5-year-old season has been marked by a series of near-misses, recording one win from six starts so far this year. Following her lone 2015 victory in the Grade 3 Dr. James Penny Memorial Handicap in July, last year's Grade 1 Just a Game winner reemerged on the New York circuit, checking in fifth in the Grade 2 Ballston Spa at Saratoga Race Course before turning in a fourth-place finish in the Grade 3 Noble Damsel on September 19 at Belmont.

Trainer Brian Lynch believes the Medaglia d'Oro mare is better suited to the 1 1/16-mile inner turf route of the Athenia than the one-mile chute contest she faced in the Just a Game and the Noble Damsel, where she finished 1 ¾ lengths behind the Breeders' Cup-bound Recepta.

"She's never been in love with the one-turn stuff, so I'm just trying to rerun that race. She didn't get beaten far," Lynch said of Coffee Clique's last start. "She got pinned down on the inside and got a little rank. She's better if she can get clear and she can get a free run at them.

"I thought I brought her back a little quick in the Noble Damsel too," he added. "She's had a little bit of time now and she had a nice work over the weekend, so fingers crossed. When she runs her good races, I think she's competitive with the group she's in with. She's got tactical speed. Hopefully she can just get a good position on the outside and stay out of trouble."

Installed at 7-2 on the morning line, Coffee Clique will be ridden by Luis Saez from post 10.

Coffee Clique will face a familiar rival in Lady Lara from the barn of Hall of Famer Bill Mott.

The pair have squared off four times since last spring with the Irish-bred Lady Lara coming out ahead of her opponent on three occasions, including Lady Lara's lone graded stakes score in the Grade 2 Honey Fox in March. Coffee Clique got the better of her peer in their next start, finishing second to Tepin in the Grade 2 Distaff Turf Mile in May, 4 ¾ lengths ahead of Lady Lara in fourth.

Lady Lara, bearing the Kelly green silks of Ben Sangster, will break from the outside post 13 at the top of the clubhouse turn under regular rider Junior Alvarado as the mild 3-1 morning line favorite.

At the other end of the starting gate, trainer Christophe Clement hopes Stellar Path's inside post works to his gray filly's advantage.

"In a field of 13, I prefer to be on the inside than the outside, especially the 1 1/16 [distance on the inner turf] at Belmont where you break on the turn," said Clement.

The French-bred Astronomer Royal filly will be making her first start over the local grass since joining Clement's barn this spring. Stellar Path returned from a 2 ½-month layoff with a close third-place finish in the Avowal Stakes over firm ground at Woodbine. Joel Rosario is named to ride Stellar Path, 8-1 on the morning line.

"She's trained well, she looks well," Clement said. "It became a very tough race but that's OK, she got a great draw. Rosario worked her and she had a very nice breeze with him so he knows the filly. We'll try for the best. I was hoping for a little bit of rain today or because I think her form on softer ground is much better, but there's not much I can do about that. Other than that, she's fine."

Flaxman Stable's Faufiler will look to make the grade in her North American debut for trainer Pascal Bary. A two-time stakes winner in France, the Irish-bred daughter of Galileo was most recently fourth in the Group 3 Prix Quincey Barriere at Deauville. Faufiler, who will be racing with Lasix for the first time, is expected to join Graham Motion's stable in the U.S. following race.

Faufiler's regular jockey Stephane Pasquier is scheduled to ship in to ride. The pair will leave from post 12 at 4-1 on the morning line.

Motion, meanwhile, will send a pair of runners in Rusty Slipper and Joy. Winner of the One Dreamer at Kentucky Downs in her last start, Rusty Slipper, 12-1, will leave from post 7 with Hall of Famer John Velazquez. Maryland-bred Joy, 50-1 on the morning line and winner of the restricted All Brandy at Laurel this summer, will be ridden by Chris DeCarlo from post 8.