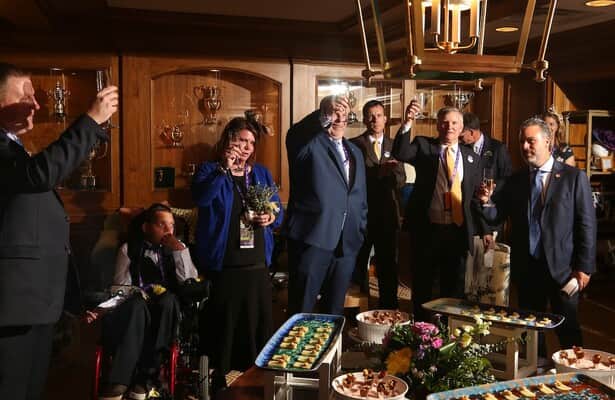 Created by Secretariat’s owner Penny Chenery, the annual award recognizes the horse whose popularity and racing excellence best resounded with the public and gained recognition for Thoroughbred racing.

Owned by Godolphin, trained by Bill Mott and ridden throughout the year by Júnior Alvarado, Cody’s Wish and his special story gained affection and admiration that transcended the sport of racing.

In addition to his racing success, it was his continuing connection with his namesake Cody Dorman, 16, who lives with a rare genetic disorder, that captured fans’ hearts and an abundance of Vox Populi votes.

In 2018 Richmond, Ky., native Dorman was offered a tour of Godolphin’s Gainsborough Farm as part of Keeneland’s Make-A-Wish Day.

Dorman’s condition, Wolf-Hirschhorn Syndrome, rendered him unable to speak and relegated him to a wheelchair. During Dorman’s visit to the farm, an inquisitive 6-month-old foal walked over and put his head in the boy’s lap. With that the bay colt earned his name, Cody’s Wish.

Nearly four years later the special bond and sweet interactions between the two continued, including just days before this year’s Breeders’ Cup when the now grown-up and strapping racehorse reconnected with his longtime pal.

“Cody’s Wish and his namesake Cody Dorman forged an instant bond that would grow to connect millions of fans to their inspiring story of hope and determination,” said Kate Chenery Tweedy, daughter of Penny Chenery. “Not only did Cody’s Wish win the Breeders’ Cup Dirt Mile, as Cody predicted, but both Cody’s won the hearts of people everywhere. Their uplifting story exemplifies the best ideals of the Vox Populi Award, just as Mom wished.”

“We at team Godolphin are delighted that Cody’s Wish was voted by the fans to be the recipient of the 2022 Vox Populi Award,” a statement from Godolphin said. “The story of the two Codys bond for each other since the foal, Cody’s Wish, and the boy, Cody Dorman, first met in 2018 is a magical one, culminating with the star athlete and the young man sharing the winner’s circle at the Breeders Cup.”

Cody’s Wish, sire by Curlin and out of the Tapit mare Dance Card, clearly embodied the meaning of vox populi, Latin for voice of the people. The fifth-generation great grandson of Secretariat garnered thousands of votes in the online public poll while besting the other 2022 nominees – Flightline, the undefeated Breeders’ Cup Classic winner, and Rich Strike, the 80-1 winner of the Kentucky Derby.

Nominees for the award were submitted by the Vox Populi committee comprised of distinguished personalities from within and outside the racing industry. Voters also had the option to write in their own favorite candidate to recognize other exceptional horses.

The Vox Populi trophy presentation is scheduled to take place at Santa Anita Park on Jan. 14.