Code of Honor headlines overflow field in the Clark Stakes 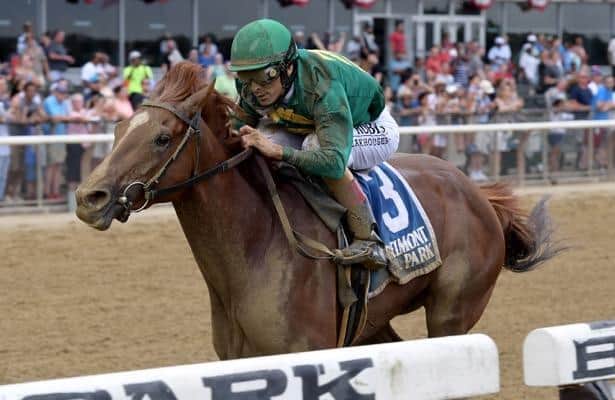 W.S. Farish’s multiple Grade 1 winner Code of Honor will take on 13 rivals, including graded stakes winners By My Standards, Mr Freeze and Owendale in Friday’s 146th renewal of the $500,000 Clark (G1) — the marquee race of the Fall Meet at Churchill Downs.

Code of Honor, a 4-year-old son of Noble Mission (GB), achieved Grade 1 glory in last year’s $1.25 million Travers and $750,000 Jockey Club Gold Cup. Trainer Shug McGaughey III had his sights set on a strong 2020 campaign but when the COVID-19 pandemic struck, he was forced to alter the colt’s plans.

“He’s just been a victim of circumstances with the COVID situation,” McGaughey said. “I would’ve liked him to run him in the Westchester, which would’ve been the start of the Belmont Meet in the spring. I would’ve spaced the races out that way. That didn’t work out, so we couldn’t run until June 6 in the Westchester. He won that, and I really had in my mind I wasn’t going to run him back until the Whitney. He’s run a lot better with his races spaced.”

Hall of Fame jockey John Velazquez will ride Code of Honor from post position No. 3.

“Johnny told me after the Met that this horse definitely wants two turns,” McGaughey said. “His race in the Kelso against Complexity, who was the favorite in the Breeders’ Cup Dirt Mile, was a really good race. We had to change riders on him that day. Javier (Castellano) is obviously a great rider but may not have known him as well as Johnny did. All in all, it was sort of just a messed up year. Now he’s gotten his space and he’s run good over this Churchill track.”

Code of Honor was one of the top 3-year-old prospects in 2019 following his victory in the $400,000 Florida Derby (G2) at Gulfstream Park. He placed second in the $3 million Kentucky Derby prior to his Travers and Jockey Club Gold Cup victories.

Among the other top older horses that entered the race is Allied Racing Stable’s $400,000 Alysheba (G2) winner By My Standards. Trained by Bret Calhoun and ridden by Gabriel Saez, By My Standards finished eighth in this year’s Breeders’ Cup Classic (G1), his only off the board finish through seven starts in 2020.

“He loves this track at Churchill Downs so I think he’ll do a lot better getting back here,” Saez said. “We didn’t get the best of trips in the Breeders’ Cup and he didn’t like the surface that day. He worked really well (on Friday). He just has such a big stride and covers a lot of ground.”

Also entered is Rupp Racing’s three-time Grade 3 winner Owendale. Trained by Brad Cox, Owendale finished second behind By My Standards in the Alysheba. The 4-year-old son of Into Mischief began his 2020 campaign with a victory at Churchill Downs in the $100,000 Blame Stakes. Owendale enters the Clark following a fifth-place effort in the $1 million Breeders’ Cup Dirt Mile at Keeneland.

“In the Alysheba, there was no pace,” Cox said. “He doesn’t really like kickback so we have to make sure he gets out in the clear. I think his efforts this year have put him in contention with some of the older horses in this handicap division.”

Owendale was the runner-up finisher behind Tom’s d’Etat in last year’s Clark. Florent Geroux has the call on Owendale from post 9.

Jockey David Cohen will ride Mr Freeze in the Clark from post 7.

Finishing just a neck behind Mr Freeze in the Fayette was Stonestreet Stables, George Bolton and Peter Leidel’s Aurelius Maximus. The 4-year-old colt was transferred from trainer Chad Brown to Steve Asmussen at the end of 2019 and immediately found success reeling off consecutive allowance victories.

Aurelius Maximus is one of two horses entered in the Clark for Asmussen. The other is Ed and Susie Orr’s four-time winner Silver Prospector. The 3-year-old son of Declaration of War rallied to win a 1 1/8-mile allowance event on Oct. 30 at Churchill Downs. Earlier in his career, the gray colt was on the Kentucky Derby trail with victories in the $200,000 Kentucky Jockey Club (G2) and $750,000 Southwest Stakes (G3).

Ricardo Santana Jr. has the call on Aurelius Maximus from post 5 while Gerardo Corrales picks up the call on Silver Prospector from post 14.

Rafael Bejarano has the mount on Bodexpress and will break from post 8.

In total, the Clark field has accumulated 58 wins with earnings of more than $12.4 million.

*Rating is based on HRN fan votes, which rank the Top Active Horses in training.
Owendale By My Standards Code of Honor Clark Stakes Clark Stakes (2020)

How many races will be on Tapeta for '21-22 Gulfstream meet?
Gulfstream Park could have nearly a third of its r...
x close