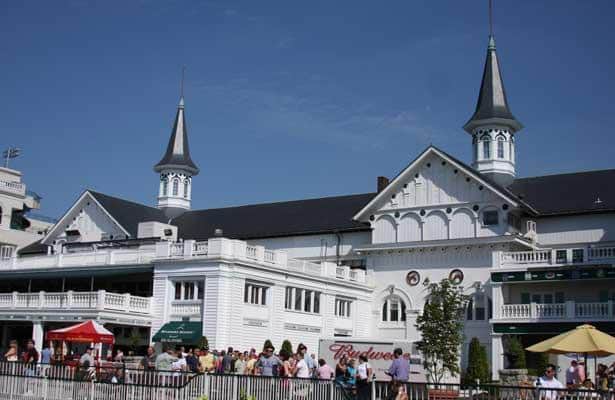 John Oxley’s Coastline took the lead from Almost Famous around the turn for home and increased his advantage in the stretch to take the inaugural running of the $61,800 Street Sense by a widening three lengths over Ichiban Warrior on opening day of Churchill Downs’ 25-day Fall Meet.

The Street Sense, named in honor of the 2007 Kentucky Derby winner, was the highlight of “Stars of Tomorrow I,” an 11-race program entirely devoted to 2-year-olds that have aspirations of trail-blazing their way to next year’s Kentucky Derby Presented by Yum! Brands and Longines Kentucky Oaks.

Coastline, an Oct. 5 maiden winner at Keeneland, ran one mile in 1:36.77 for jockey Shaun Bridgmohan and trainer Mark Casse.

The much-ballyhooed Almost Famous, the 9-5 second betting choice after defeating Coastline by 2 ¼ lengths in a Sept. 13 maiden special weight at Churchill Downs, set the early pace of :22.92 and :47.14 with Coastline putting pressure on the leader from the outside. The eventual winner gained a short lead with a furlong to go and drew clear under Bridgmohan’s urging. Ichiban Warrior, who also was forwardly placed, made a bid on the turn but was no match late and was second best.

Coastline, a gray or roan Kentucky-bred son of Speightstown, paid $10, $4.80 and $2.60. Ichiban Warrior, under Rosie Napravnik, returned $7 and $3. Ride On Curlin, the even-money favorite ridden by Corey Lanerie, was another four lengths back in third and paid $2.10. Almost Famous faded to fourth and was followed by Chippewawhitechief and Cee ’n O. Phenomenalmoon, another Oxley and Casse runner, was scratched.

The $37,979 winner’s share of the purse increased Coastline’s earnings to $80,779. He is now a two-time winner in three career starts.

Norman Casse, who oversees his father’s Churchill Downs string, said Grade II, $175,000 Kentucky Jockey Club at 1 1/16 miles on Nov. 28 is an option for Coastline’s next start. The KJC is part of the “Kentucky Derby Prep Season” and the Top 4 finishers will earn 10-4-2-1 points, respectively, on the “Road to the Kentucky Derby.” Oxley and Casse teamed to win last year’s renewal with Uncaptured.

Saturday’s 11-race program also included the first running of the $62,700 Rags to Riches for 2-year-old fillies. Clever Beauty, owned by Richard Masson’s Green Lantern Stables, LLC, out-dueled Vexed in deep stretch to win the one-mile race by three-quarters of length in 1:37.70. Tepin, the 8-5 favorite, was another three-quarters of a length back in third.

Corey Lanerie rode the winner, a bay Kentucky-bred daughter of Indian Charlie, for trainer “Rusty” Arnold II. Clever Beauty improved her record to two wins in three starts, and the $38,143 jumped her bankroll to $66,277. She paid $12 to win.

OTHER STARS OF TOMORROW WINNERS

Also, Naprvanik appeared to escape serious injury in the seventh race when she was dropped from her mount Be Nice Or Leave shortly after the start of the one-mile turf race. After examination in the Jockey’s Room by the Churchill Downs medical staff, she was body sore and took off her remaining four mounts. Later on Twitter, @RosieNapravnik posted the following: “Thx for all the concern.... Ill be sporting a few new temporary hoof print tattoos but I am fine other than a bit soreness!”

Racing at Churchill Downs resumes Wednesday with a 10-race program that begins at 12:40 p.m. ET.

NORMAN CASSE, assistant to Mark Casse, trainer of COASTLINE (winner): “He’s shown us all along that he was one of our better 2-year-olds. We’ve been pretty high on him all along.”

Q: Did this race surprise you in any way in regard to the way it was run, or did he do anything that surprised you? “I don’t think there were any surprises. I’d have to watch the replay to see how everyone else ran, but I thought we’d be sitting second or third. He trained really good up to the race, so we were expecting a big performance today.”

Q: Will he run back in the Kentucky Jockey Club at the end of the meet? “I’d have to let Dad and Mr. Oxley (owner John C. Oxley) discuss that, but that’s definitely an option.”

SHAUN BRIDGMOHAN, rider on COASTLINE (winner): “He’s such a kind horse. Mark (trainer Mark Casse) and Norman (assistant Norman Casse) have done such a phenomenal job with him, because he’s very kind to rate and he basically just waits for a command. I basically just put him in a stalking position and he was kind enough to let the bridle go and relax. When I asked him to pick it up down the lane he really finished up.”

ROSIE NAPRAVNIK, rider of ICHIBAN WARRIOR (runner-up): “He ran very well. We tracked that horse all the way and came up to challenge him. We stayed with him for a while, but he just skipped away from us in the end.”

COREY LANERIE, rider on favored RIDE ON CURLIN (3rd): “He broke a little slow – he got a little mixed-up in the gate and didn’t leave like I was hoping he would. My thoughts were I’d be toward the back and behind the speed. He was just sittin’ there, but they backed the pace up a bit slower than I wanted. But he just didn’t finish for me. They’re going to scope him – maybe he’s got a little crud or something. But I don’t think he was the horse today that he can be. “

JOE ROCCO JR. rider on Almost Famous (4th): “He’s a really nice colt. He’s young – it was his first time going a mile. At the top of the stretch they went by him and he stayed on. He didn’t stop at all. He’s just a really nice colt that I think will continue to develop and I look forward to seeing what he can do down the road.”

PAT BYRNE, trainer of ALMOST FAMOUS (4th): “It’s a disappointment – it’s kind of a head-scratcher on this one. I have no idea what happened. We have no excuses. The first quarter was a little quick, but Joe (Rocco) backed him up nicely. He had a good trip, no excuses there. It’s just a head-scratcher. I don’t know. Hopefully it’s just one of those toss-out races. The horse has trained here – he’s trained super. Joe said he didn’t back up – he just didn’t quicken. It’s disappointing, for sure.”

GEORGE “RUSTY” ARNOLD, trainer of CLEVER BEAUTY (winner): “She’s an improving little filly. She’s really doing good this fall. We actually got lucky. We entered her in an a-other-than over at Keeneland that didn’t fill. We wanted to run long and this one just fell in the right spot and we’re really happy with her.”

Q: That maiden race she won via disqualification at Churchill Downs in September must have been a pretty good race … “The winner (Harlan’s Special) came back and ran very respectable in the Alcibiades and I know that (trainer Gary) Red Dog (Hartlage) loves her. She (Clever Beauty) had run the one start sprinting but we thought she wanted to go a little bit farther and we thought she’d improve. She’s one of those fillies that is a little hard to get a handle on because she just keeps coming at you all the time. So we think there’s room for improvement there.”

COREY LANERIE, rider on CLEVER BEAUTY (winner): “She wanted to lay on ‘em and not go by ‘em. It seemed like the more I was trying to ride her, the more she wanted to lay on ‘em and at one point I thought she was going to give it away. I don’t know what she was looking at, but she just wouldn’t get off of ‘em. I just kind of held her and held her off of them. I had plenty of horse left – it was just a matter of making her go on and do it. She had her ears up and was looking around, but she ran a huge race.”

Q: You rode her in the September maiden race when she finished second but got the win via disqualification. Did you notice any difference in her today? “She was a little more forwardly placed. They didn’t go very fast up front, but that day I think they went about a half in :48 and I was five or six (lengths) off of it. Today she was just waiting for me to push the button. Maybe it was just her being on the outside, keeping her face clean, but in the middle of the turn I thought she’d be really tough to beat.”

AL STALL JR., trainer of favored VEXED (runner-up): “It looks like everything went our way. She left there fine and got a good position. I thought we kind of got a little bit outrun that last part, but she sure ran a good race, though.”

SHAUN BRIDGMOHAN, rider of favored VEXED (runner-up): “I thought she tried hard. She’s still in the learning process and she was down on the inside. She tried.”