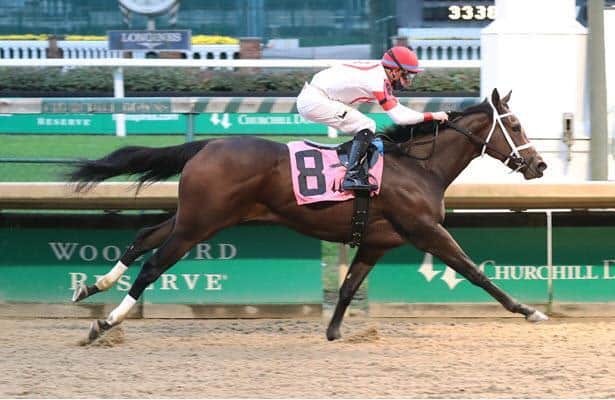 Coach remained unbeaten in three starts when she drew away from Lady Traveler in deep stretch to win Sunday’s eighth running of the $98,000 Rags to Riches Stakes for 2-year-old fillies by 2 1/2 lengths on opening day at Churchill Downs.

Ridden by Florent Geroux and trained by Brad Cox, Coach ran 1 1/16 miles in 1:45.14 while making her two-turn debut. Previously she recorded dominant victories in sprints at Indiana Grand, including a 4 1/4-length maiden win and a first-level allowance score by 9 ¾ lengths.

Malibu Bird and Salty as Can Be dictated the Rags to Riches pace as they led the field of nine 2-year-old fillies through opening splits of :23.44, :47.98 and 1:12.98. Coach tracked from third in the clear down the backstretch and took over the lead leaving the far turn. Lady Traveler rallied into contention down the stretch but was no match for Coach who drew clear late.

#8 Coach now a perfect 3-for-3 with a dominant win in the Rags to Riches at @ChurchillDowns with @flothejock up for @bradcoxracing pic.twitter.com/1aK085ziLT

“We sat a really good trip all along,” said Geroux, who has won the Rags to Riches in three of the last four years (note: the other wins came with Monomoy Girl in 2017 and Mother Mother in 2018). “It was her first time at two turns and she really handled the extra distance well. We galloped out really strong, too.”

Dash to the Top, 2-1 favorite Midnight Ballerina, Torsie’s Charm, Orsetto, Malibu Bird and Salty as Can Be completed the running order.

By Commissioner, Coach is a Kentucky-bred filly out of the Exchange Rate mare And Stay Out. She was bred by Three Lyons Racing.

“With the pedigree, we thought she would like the extra distance,” Cox said. “With a horse making their start around two turns for the first time, you never really know how they’ll handle the extra ground. She showed today that she loved it.”

Sunday’s race is named in honor of Derrick Smith and Michael Tabor’s 2007 Kentucky Oaks (GI) winner. Three years ago, Michael Dubb and Monomoy Stables’ Monomoy Girl, also trained by Cox, cruised to a 6 ½-length score in the Rags to Riches prior to her triumph in the 2018 Kentucky Oaks.