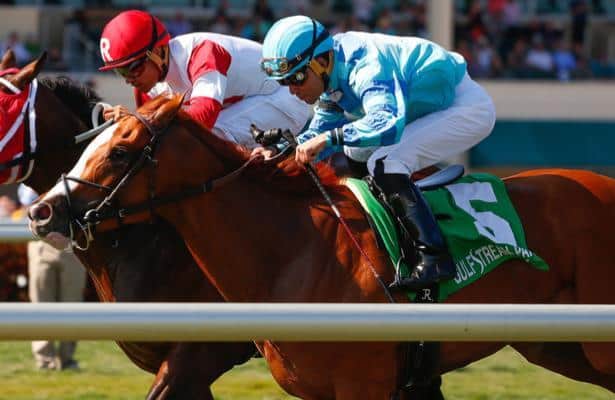 Sullimar Stable's Clyde's Image, who has faced some of the best horses in the turf division and has never finished worse than fourth in nine career starts, will seek his first stakes victory in Sunday's Grade 3, $300,000 Poker over the Widener turf course at Belmont Park.

The 5-year-old Get Stormy gelding enters the one-mile event for 4-year-olds and upward off of two Grade 1 placings at big prices. He was a close runner-up in the Maker's 46 Mile at Keeneland behind Delta Prince and most recently was third in the Old Forester Turf Classic at Churchill Downs won by Bricks and Mortar.

Trained by Thomas Bush, Clyde's Image was also graded stakes-placed as a 3-year-old when second in the Dania Beach (G3) at Gulfstream Park at odds of 45-1. Following a next-out second in the Kitten's Joy at Gulfstream in February 2017, he was freshened until October 2018 but returned in winning fashion against allowance company over a yielding inner turf course at Belmont.

"We had some space between the Old Forester and this race, so the timing works out well," Bush said. "We took a bit of a chance traveling with him to Keeneland and running in such a deep race, but he was doing well and he deserved a chance. He had good 3-year-old form before he got hurt. Not all horses are able to duplicate their form as an older horse the way he has, but he's one of those special ones."

Bred in Kentucky by Barr Inman, Clyde's Image is out of the Marquetry broodmare Marquetessa. He will break from the inside post under jockey Javier Castellano.

Trainer Christophe Clement will saddle a pair of New York-bred stakes winners with a strong affinity for the Belmont turf seeking a victory against open company.

Castleton Lyons' Gucci Factor won the Kingston last out on May 27 and the 6-year-old gelded son of Gio Ponti makes his graded stakes debut when he breaks from post 4. The winner of six of his 13 career starts is a three-time winner over the lawn at Belmont, including two open company allowance wins. Jockey Joel Rosario will pilot Gucci Factor.

Oak Bluff Stables' Therapist was fourth behind his stable mate in the Kingston but has won four times over Belmont's turf course, including open company stakes wins in the Awad in October 2017 and the Elusive Quality two starts back. The 4-year-old son of Freud also took two divisions of the New York Stallion Stakes Series during his 3-year-old campaign last year.

Bred in New York by Clement and his owners, Therapist is out of the Smart Strike broodmare Lady Renaissance. He will be ridden by Eric Cancel and has been assigned post 7.

Hall of Fame trainer Shug McGaughey will saddle Breaking the Rules, who has been assigned post 8 for the Poker.

A Phipps Stable homebred, the dark bay 4-year-old son of War Front is out of the graded stakes placed broodmare Protesting and is a direct descendant of Hall of Famer Personal Ensign and multiple Grade 1 winner My Flag. Three starts back, Breaking the Rules was a stakes winner over the turf at Gulfstream Park when taking the Tropical Park Derby.

Breaking the Rules will be ridden by Hall of Famer John Velazquez.

Peter and Eloise Canzone's Dr. Edgar seeks a second graded stakes win in the Poker. Trained by Barclay Tagg, the son of Lookin At Lucky was a wire-to-wire winner of the Appleton (G3) at Gulfstream Park two starts back, where he recorded a career best 98 Beyer Speed Figure. Last out, he was second, defeated three lengths in the Fort Marcy (G3) on May 4 at Belmont Park.

Dr. Edgar will emerge from post 9 under Dylan Davis.

Trainer Chad Brown has won 14 stakes this meet at Belmont Park and could score another when he saddles Ticonderoga, who breaks from post 6 under Jose Ortiz. Owned by Woodford Racing, Ticonderoga seeks his first graded stakes win since taking the Palm Beach (G3) at Gulfstream in March 2017. The well-bred son of Tapit was ninth in the ld Forester Turf Classic last time out.

Bred in Kentucky by Bryan Prentice III, Ticonderoga is out of five-time graded stakes winning millionaire Keertana, who ran third in the 2010 Breeders' Cup Filly and Mare Turf.