Closers a good bet on Gulfstream’s Tapeta through 2 weeks 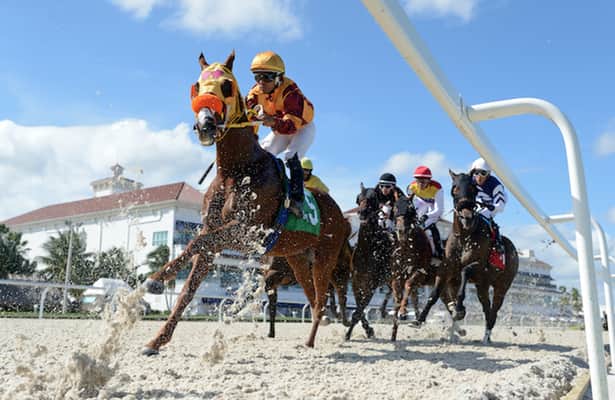 Frontrunners, beware! Closers continued to dominate during the second week of action on the newly installed Tapeta track at Gulfstream Park.

Only two frontrunners were successful on the all-weather surface during Week 2, one more than during Week 1. In the 19 races contested over the all-weather surface in Week 2, 11 horses came from mid-pack or farther back to win, following the trend of the first week of Tapeta action, when 11 of 18 winners came from mid-pack or off the pace. The other races were won by horses that stalked or pressed the pace.

Horses with turf experience also have been dominating during the first two weeks of racing on the all-weather surface. During Week 2, all winners went into their races with turf starts on their resumes; there were two winners (one a first-time starter) with no turf races on their records during Week 1.

Chalk bettors were rewarded in 11 of the 18 (61 percent) races run on Tapeta during Week 1, but favorites were less successful during Week 2, winning seven of 19 races (35 percent). Four of the seven winning favorites ran on last Sunday’s program.

After two weeks of racing on Tapeta, 37 races have been run on the all-weather surface. Eighteen favorites came through for their backers. Only three frontrunners successfully carried their speed to hit the finish line first, and 22 races were won by horses coming from mid-pack or off the pace. Twelve horses who pressed or stalked the early pace visited the winner’s circle. One first-time starter won, and 28 horses who made their last starts on turf and eight horses who most recently ran on dirt (including off-the-turf starts) won their first races on Tapeta.

Edwin Gonzalez leads all jockeys with six wins on the all-weather surface, including four trips to the winner’s circle on horses trained by Hall of Famer Mark Casse, who is tied with Antonio Sano in the Tapeta training standings with five winners.