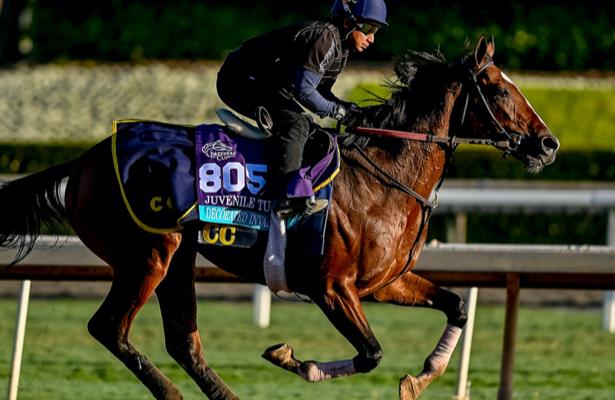 Gufo [49.45] and Decorated Invader [49.49] worked together on the Belmont inner turf on Sept. 13. Trainer Christophe Clement said both horses are in good order with the Belmont Derby the main goal although the Grade 2, $150,000 Hill Prince at 1 mile on the turf for 3-year-olds on Oct. 12 remains a possibility for Decorated Invader.

"They are both doing great, and they will train again together this weekend. I'm quite happy with the two of them," said Clement. "Both horses are training toward the Belmont Derby, but a final decision has not been made yet."

Both of the talented colts are by Declaration of War and made their last start on Aug. 15 in the Saratoga Derby Invitational, won by Domestic Spending. Gufo closed to finish second, defeated a head, with a pace-prompting Decorated Invader in fifth, less than a length back.

Decorated Invader captured the Summer (G1) at Woodbine last September and entered the Saratoga Derby undefeated in 2020 with wins in the Cutler Bay at Gulfstream, Pennine Ridge (G2) at Belmont and Hall of Fame (G2) at Saratoga.

Gufo also entered his last start undefeated in 2020 after wins in an optional-claiming route and the English Channel at Gulfstream ahead of making the grade in the Kent (G3) at Delaware Park.

Clement notched 20 wins at the recently concluded Saratoga summer meet, good for third in the standings, and will look to start out the Belmont fall meet in style when saddling previously unraced 2-year-old Space Launch and up-and-coming New York-bred Jewel of Arabia on Friday's 10-race card.

By Bernardini, Space Launch is out of Grade 2-winner Spacy Tracy and is a half-brother to graded-stakes winners Victim of Love — third last out in the Ballerina (G1) — and Benner Island.

He will travel one mile on the Widener turf at first asking from the inside post in Friday's sixth race under Manny Franco for owners Athlone Racing and Daniel and Jane Burke.

After spending the summer training at Saratoga for Clement, Space Launch worked an easy five-eighths in 1:03.65 on Sept. 12 on the Belmont main track.

"I like him. He's training well, so we'll see what happens. He's a nice horse," said Clement.

Sumaya U.S. Stable's New York-bred Jewel of Arabia enters Friday's eighth race, a 6 1/2-furlong optional-claiming sprint for state-breds, on the back of two impressive wins, including a 7-length maiden win in July on a sloppy Belmont main track and a 3-length score last out in a state-bred allowance sprint on July 31 at Saratoga that garnered a career-best 80 Beyer Speed Figure.

Hall of Famer John Velazquez has the call from post 4 aboard the sophomore daughter of Daredevil, who was bred in New York by SF Bloodstock.