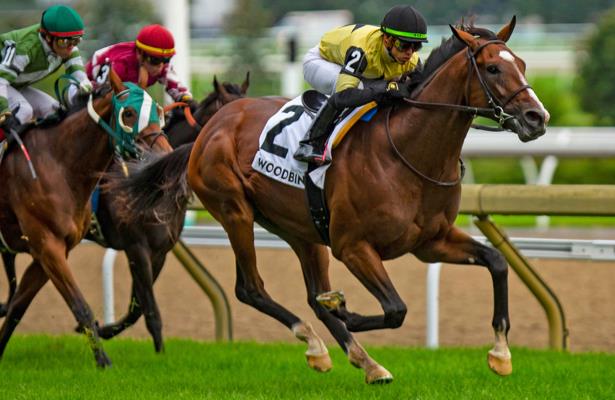 Clement said both could square off in the Grade 2, $150,000 Pennine Ridge, a one-mile turf test slated for Belmont Stakes Day June 20.

"This is the kind of problem you like to deal with," the trainer added. "They both will train for the Pennine Ridge."

Since defeated on debut, Decorated Invader has lost just once, in the Breeders' Cup Juvenile Turf. He entered that spot off a victory in Woodbine's Summer Stakes (G1) and returned to kick off 2020 with a rallying score March 28 in Gulfstream Park's Cutler Bay Stakes.

Campaigned in partnership by West Point Thoroughbreds, Decorated Invader is a son of Declaration of War with three breezes over the Payson Park turf since his last victory.

Otter Bend Stables' Gufo, also a son of Declaration of War, has won three straight races, most recently Gulfstream's English Channel on May 2.

"Gufo worked well today," Clement said Thursday. "He is a very nice 3-year-old and he won a stakes last time at Gulfstream Park."

Clement said he is also considering sending Gufo west for the $150,000 Cinema, a nine-furlong turf test for 3-year-olds on June 6 at Santa Anita Park.

Clement also sent out five turf workers on Thursday morning at Belmont Park with an eye to upcoming stakes races at the spring/summer meet.

"I'm delighted to be back in New York and very grateful to have racing," said Clement, who sent out Call Me Love, Madeleine Must, Arthur Kitt, Gufo and Focus Group for half-mile breezes on the inner turf.

Call Me Love, a 4-year-old British-bred daughter of Sea The Stars, has trained in Florida at Payson Park all winter for Clement and will make her North American debut in the Beaugay (G3) on opening Wednesday of the meet.

Previously campaigned in Italy, the multiple group-stakes winner went in company with another newcomer Madeleine Must, a French-bred daughter of Motivator who won the Prix de la Cochere at Longchamp in September.

Both fillies were clocked in 47.69, the fastest of nine efforts at the distance.

"Call Me Love is being trained for the Beaugay. She came from Italy and she has trained very forwardly all winter long," said Clement. "She seems to have a lot of quality and it will be exciting to see her race. She may be better suited to a longer distance, but we will see.

"Madeline Must is possible for the Intercontinental," continued Clement. "She's eligible for an allowance race, but I thought she worked well. I'll see how she comes out of it and make up my mind."

Another Clement star expected to race early in the meet is Castleton Lyons' Gucci Factor. Clement said the New York-bred son of Gio Ponti, who won the 2019 Grade 3 Poker, could make his seasonal debut in the Fort Marcy (G2) set for June 6 at nine furlongs on the Belmont turf.

Patricia Generazio's 9-year-old homebred Pure Sensation will also be returning to New York with an eye to the Jaipur (G1). The six-furlong turf test for 3-year-olds and up is slated for Belmont Stakes Day June 20 and offers a berth in the Breeders' Cup Turf Sprint.

Calumet Farm homebred Casino Grande, a sophomore son of Cairo Prince, is perfect through two starts. The dark bay won on debut in March at Tampa Bay Downs and followed up with a resounding 3 1/4-length win in an optional-claiming mile on May 16 at Gulfstream Park.

Clement said Casino Grande is expected in the Easy Goer, a 1 1/6-mile test for 3-year-olds set on June 25.

"He is a very nice horse. We're pointing him to the Easy Goer," said Clement. "He won at seven-eighths first time very nicely and second time out he came back at a mile and won well."

The veteran conditioner said he is continuing to assess which distances will best suit the talented colt.

"I'm not sure yet. He's only had two starts and I'm still learning about him," said Clement. "I think it would be nice to train him to see if he stays. If he doesn't, we can come back shorter."
Gufo Decorated Invader Christophe Clement