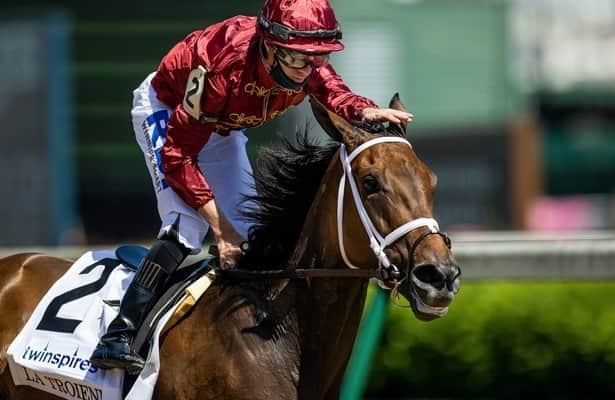 The Hirsch awards its winner a fees-paid berth to the Breeders’ Cup Distaff, which will run at 1 1/8 miles Nov. 6 over the same Del Mar oval.

Trainer Brad Cox enjoyed a graded victory Saturday when Essential Quality grinded out a Jim Dandy Stakes (G2) score at Saratoga. Now he will aim for a Grade 1 Sunday with Shedaresthedevil, whom he shipped to Southern California for this affair.

Jockey Florent Geroux has the mount Sunday on Shedaresthedevil, a Daredevil filly.

The 8-5 second choice is As Time Goes By for trainer Bob Baffert and jockey Mike Smith. She enters off back-to-back Santa Anita wins in the Santa Margarita Stakes (G2) and Santa Maria Stakes (G2).

Here is a look at the field for the 2021 Clement L. Hirsch Stakes (trainer and jockey in parentheses) with morning-line odds:

TimeformUS’ pace projections show Shedaresthedevil going out to an early lead under Geroux, followed by Venetian Harbor and As Time Goes By.

Reinier Macatangay shares his Sunday Plays for the Clement L. Hirsch, Saratoga’s Amsterdam Stakes (G2) and some of the day’s other races. See why he thinks Paige Anne can be a valuable addition to bettors’ tickets.

In Keeler Johnson’s latest edition of Horses to Watch, he highlights Hirsch runners As Time Goes By and Venetian Harbor.

Shedaresthedevil’s cross-country trip to contest the Hirsch could give the race extra significance toward sorting out the older female division.

Courtesy of the National Thoroughbred Racing Association, here is a look at other graded stakes taking place Sunday across North America. All times are EDT.

All-time Canadian great sprinter Pink Lloyd and Souper Stonehenge lead a six-horse field in the Vigil Stakes at Woodbine going six furlongs on the all-weather surface. The 9-year-old gelding Pink Lloyd, who won last September’s Vigil, has won 26 of 34 starts for owner Entourage Stable and Canadian Hall of Fame trainer Robert Tiller. A seven-time Sovereign Award winner, including the 2017 Canadian Horse of the Year, Pink Lloyd will try to turn the tables on Florida-bred Souper Stonehenge, who defeated him last time by four lengths in the six-furlong Jacques Cartier Stakes (G3) at Woodbine on June 20. Rafael Hernandez has the mount from post 3. Live Oak Plantation’s 5-year-old homebred gelding Souper Stonehenge is the even-money morning line favorite in the Vigil off his dominant win in the Jacques Cartier, which was his first graded-stakes victory. Trained by Mark Casse, Souper Stonehenge has won four races, and was third in this year’s Carter Handicap (G1). Patrick Husbands will ride, breaking from post 2.

Eight fillies and mares have been entered in Woodbine’s Royal North at six furlongs on the turf, and favoritism should vie between Perry Harrison’s 5-year-old Change of Control and Jim and Susan Hill’s 5-year-old Lead Guitar. Making her first start at Woodbine, Change of Control, trained Michelle Lovell, has won two of her last three races. She took the listed Giant’s Causeway Stakes at Keeneland on April 10, and after finishing second by 3/4 of a length in Churchill’s black-type Unbridled Sydney Stakes on April 29, Change of Control was back in the winner’s circle, taking Belmont’s seven-furlong Intercontinental Stakes (G3) on June 3. Husbands has the mount from post 4. Lead Guitar will be making her Woodbine and 2021 debut after closing out last year with four consecutive turf sprint victories in New York. Trained by George Weaver, Lead Guitar won once at Saratoga, twice at Belmont, and once at Aqueduct, closing out the year Nov. 29 with a victory in the black-type Autumn Days Stakes. Lead Guitar will be ridden by Rafael Hernandez from post 7.

Slam Dunk Racing, Madaket Stables, Wonder Stables and Michael Nentwig’s Drain the Clock and Kirk and Judy Robison’s Jackie’s Warrior, the top two finishers in the dramatic Woody Stephens Stakes (G1) on Belmont Stakes Day, are back Sunday in Saratoga, leading five 3-year-olds in the Amsterdam Stakes at 6 1/2 furlongs. Drain the Clock, trained by Saffie Joseph Jr. and ridden by Irad Ortiz Jr. from post 2, is 4-of-5 this year, taking the black-type Limehouse and the Swale Stakes (G3) at Gulfstream Park, and the Bay Shore (G3) at Aqueduct. In the Woody Stephens, Drain the Clock stayed just off the flank of Jackie’s Warrior down the stretch until edging ahead inside the sixteenth pole to prevail by a neck. Jackie’s Warrior, who finished fourth as the odds-on favorite in last year’s Breeders’ Cup Juvenile, won the Pat Day Mile (G2) at Churchill Downs on May 2 prior to the Woody Stephens. Joel Rosario will ride from post 3.

The Grade 1, $300,000 Clement L. Hirsch Stakes will have its 51st running Sunday at Del Mar and seven high class fillies and mares have signed up to give it a go.

Three of the femmes have special credentials and will draw the most attention at the wickets and on the racetrack. The trio consists of Qatar Racing and Flurry Racing Stables’ Shedaresthedevil, Tabor, Magnier and Smith’s As Time Goes By and Ciaglia Racing and Highland Yard’s Venetian Harbor.

The 1 1/16-mile main track headliner will go as the ninth of 10 races on the Sunday program, which has a first post of 5 p.m. EDT.

Shedaresthedevil has shipped in from the East Coast to contest the Hirsch, which has been won by such top distaffers as Stellar Wind (twice), Beholder, Zenyatta (three times), Azeri (twice) and Paseana. The shipper races out of the red-hot barn of trainer Brad Cox and sports a record of seven wins in 14 starts and earnings of $1,867,318. The 4-year-old daughter of the More Than Ready sire Daredevil has won five graded stakes, including a pair of Grade 1s. She will come with her regular rider, eastern-based Florent Geroux.

As Time Goes By is a bay filly by Triple Crown champion American Pharoah who will be making the eighth start of her career. The Bob Baffert trainee was last out May 22 in the Santa Maria Stakes (G2) at Santa Anita, a 1 1/16-mile race that she won by a nose. Hall of Famer Mike Smith is signed on to ride the multiple stakes winner of $380,600.

Venetian Harbor also comes into the Hirsch off a stakes victory, hers being the Monrovia (G2) at Santa Anita on June 5. It was her fourth overall victory and enhanced her bankroll to $633,400. The quick daughter of Munnings has primarily been sprinting and her speed could prove dangerous in the Hirsch. Trainer Richard Baltas has drafted Mario Gutierrez to handle the 4-year-old Sunday.