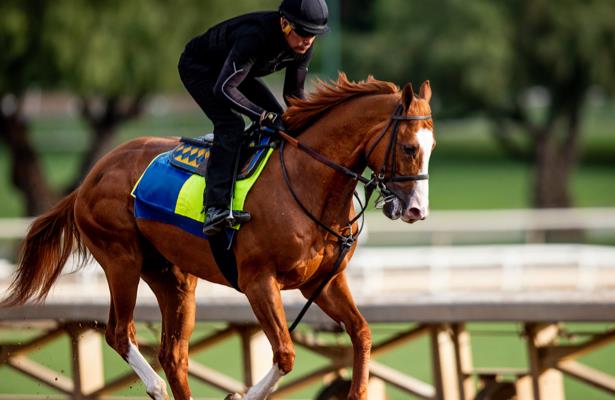 While Improbable has been idle since the Breeders’ Cup Dirt Mile back on Nov. 2, Phil D’Amato’s speedy Kershaw is the “now” commodity, as he enters Sunday’s Santana Mile fresh off of a big second condition allowance mile win on Feb. 23.

An unbeaten winner of the Los Alamitos Futurity (G1) in December of 2018, this 4-year-old City Zip colt tasted defeat for the first time in his fourth start, when second beaten a neck in the Rebel Stakes (G2) at Oaklawn Park. Second to Omaha Beach in the Arkansas Derby (G1), he was then fifth as the 4-1 favorite in the Kentucky Derby.

Favored in eight out of his 10 career starts, including a much-troubled fourth place finish two starts back in the Pennsylvania Derby (G1), Improbable has trained well for his return following a nearly five-month absence and will be handled by Drayden Van Dyke, who has guided him to four wins from five assignments, dating back to his debut here on Sept. 29, 2018.

In his most impressive win to date, this 5-year-old gelding by Run Away and Hide blasted off to a big gate-to-wire mile allowance win on Feb. 23, prevailing by 3 ½ lengths while ridden for the first time by Abel Cedillo.  Claimed out of a 13 ¼-length maiden $40,000 claimer 11 starts back on July 28, 2018, Kershaw appears ready for his first stakes assignment in what will be his 15th career start.

In terms of pace however, Cedillo may have his hands full if he again opts to gun for the early lead, as Baffert’s Ax Man, who will be making his second start off a long layoff, is extremely quick early.

THE SANTANA MILE WITH JOCKEYS & WEIGHTS

Santa Anita Park remains closed to the public due to state and federal public health dictates.