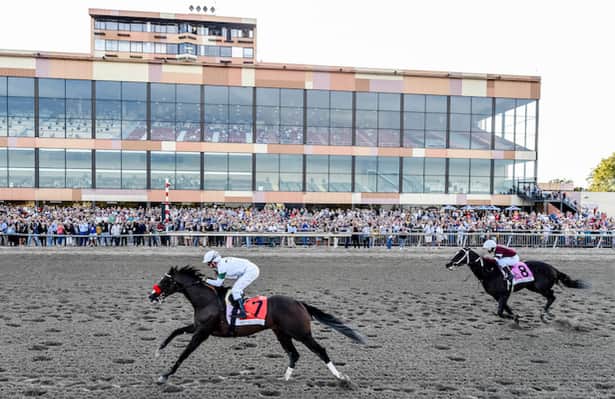 Hot Rod Charlie, who captured the Pennsylvania Derby at Parx on Sept. 29 for his first Grade 1 victory, worked four furlongs this morning at as he prepares for the Breeders’ Cup Classic at Del Mar on Nov. 6.

“He went a half-mile in 48 and change and galloped out in 1:01 and three (fifths),” the trainer added. “He looked good. It was his first piece of exercise since the Pennsylvania Derby win.

“If all goes well and he stays injury-free, he’ll have three more works between now and Nov. 6.

“More than likely, he’ll wear a set of French blinkers in the Classic, but we haven’t made that official yet.”

French blinkers are used to reduce a small portion of a horse’s usual field of vision.

With committed front-runners Knicks Go, Medina Spirit and Art Collector ticketed for the Classic, it could set up well for Hot Rod Charlie, who has been in close attendance to the pace in each of his 11 races.

“We’ve got options,” O’Neill said. “He’s shown he can win on the front or from sitting behind, so I like where we’re at. He’s definitely a versatile colt.

“We’ll probably have two more works at Santa Anita and head to Del Mar on the 25th where he’ll have his last work.”