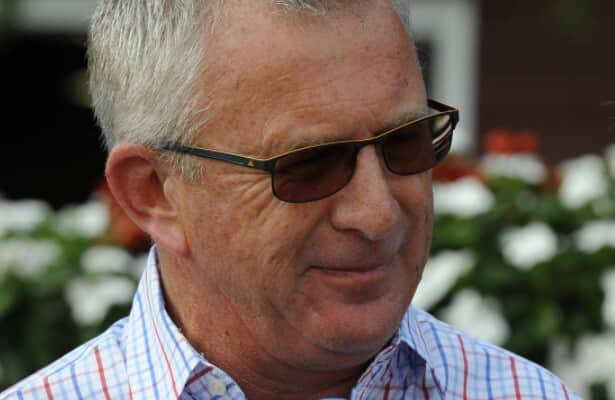 The shiny object for bettors this time of year is an undefeated record for 2-year-olds whose connections carry Kentucky Derby dreams. Less obvious are the lessons learned by growing colts, especially if they are subtle. And in races they lose.

Owned by Patrick O’Keefe’s Kentucky West Racing and the Clarke Cooper family trust, the homebred colt by Giant’s Causeway followed his 6 1/2-length debut win Sept. 4 at Saratoga with a third-place disappointment as the 9-5 favorite in the Breeders’ Futurity (G1) on Oct. 9 at Keeneland.

“He was up against it from the get-go, drawn out as wide as he was,” Classic Causeway’s trainer Brian Lynch said on the Vegas Stats & Information Network’s racing podcast. “We sort of committed to get ourselves a good position going into the first turn and ended up on the lead and ended up going quite quick.”

The same thing could happen again Saturday, although Classic Causeway is not stuck in post 13 as he was last month. This time he is on the rail, where his early speed could put him alone on the lead as quickly as the first turn will come in the 1 1/16-mile race.

“As far as speed, look, he’ll be definitely laying close,” Lynch said. “Does he have to be right ‘on the Bill Daily’ (the lead)? I don’t know. His last couple of works we’ve let him set off some horses, and he’s rated lovely. So I’m not convinced that he does need the lead after seeing him relax in behind horses.”

Memories of Keeneland have influenced Lynch’s mindset about the Kentucky Jockey Club. In the Breeders’ Futurity, jockey José Ortiz pushed Classic Causeway out to swift, pace-setting fractions of 22.81 and 46.74 seconds. By the time they turned into the stretch, Rattle N Roll was leading the charge to the front.

“I thought by the quarter pole, when they started to swamp him, that he had every conceivable chance to pack it in and call it a day,” Lynch said.

That was when he said the light bulb went on for his chestnut colt.

“The horses that laid up with him and tried to chase him, they all backed out of it,” Lynch said. “The two that sat off him and closed (Rattle N Roll and Double Thunder) were able to get there, and he wasn’t that far behind them. I thought he boxed on hard down the lane for a horse that had to do all the grunt work early.”

As easy as it might be to say Classic Causeway finished third because he could not get two turns, Lynch said the Breeders’ Futurity performance was more nuanced. It also was a teaching moment for Lynch himself.

“You work backward from your big races, so to have him cranked as tight as you could have a horse in his second start, no, he really wasn’t there,” the Australia native said. “Did he come on for the race? I believe he did, and I believe he’s really ready to get two turns this time where he may have been a little vulnerable if he had to go faster early in his second start.”

With Ortiz in New York on his way to a Florida winter, Lynch turned to the year’s top-earning jockey Joel Rosario to take over on Classic Causeway.

“He’s trained really well,” Rosario told Horse Racing Nation on Friday night. “It seems like he has some talent.”

Lynch also decided now was not the time to shy away from tightening Classic Causeway’s workouts. With Rosario up, five-furlong works this month were clocked at 59.60 seconds and 1:00.4, both bullets, before a 59.40 breeze last Saturday that was second-fastest of the 59 timed works at that distance.

“Obviously this will be his last start as a 2-year-old, and it’s for $400,000, so you damn sure want to make sure he’s nice and tight, and you’re not kidding yourself going into the race that you have got the horse that you hope you have,” Lynch said. “We’ve been seeing that in his works, and I’m always a firm believer when good horses are doing good, they work good. He’s certainly been working good.”

Now it is just a matter of translating those mornings with Rosario into a productive Saturday against the likes of Tiz the Bomb (3-1), a three-time winner on the grass who was second in the Breeders’ Cup Juvenile Turf, and Howling Time (7-2), one of those shiny 2-for-2 juveniles who won the Street Sense last month over the same course and distance as the Kentucky Jockey Club.

Lynch is not sold that Classic Causeway has to be on the early lead again.

“If there’s no pace in the race, I’m always a big believer that pace makes the race,” Lynch said. “He’s versatile to go either way. If they want to go hard early, I think we’ll just tuck in there. If there’s no pace, we’ll lead the way.”

“I’m sure he can do whatever,” Rosario said. “There’s other pace in the race, but he can do anything.”

After the Kentucky Jockey Club, Lynch plans to send Classic Causeway with the rest of his string of horses to Florida next week for races at Gulfstream Park and training at Palm Meadows.

“He’ll be given every opportunity to dance in the dances to get to the Kentucky Derby once we get down there,” Lynch said. “If he’s good enough, he’s going to take us there. We just hope we don’t screw him up and get in his way.”

Post time for the Kentucky Jockey Club is Saturday at 5:56 p.m. EST. The race will be televised by TVG.