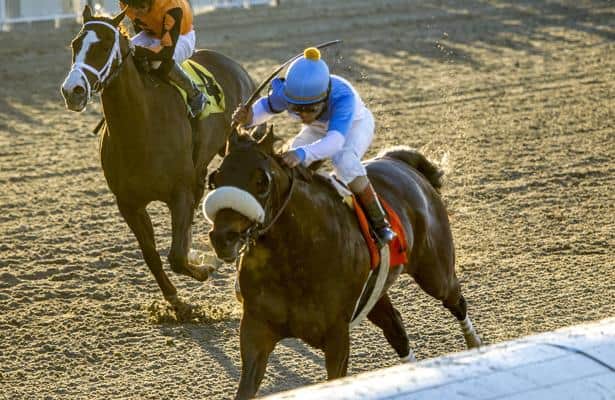 G M B Racing's Tom's d'Etat leads a talented field of nine for Friday's $100,000 Alydar, a nine-furlong test for 4-year-olds and up on the main track at Saratoga Race Course.

Trained by Al Stall, Jr., the 6-year-old Smart Strike horse boasts a record of 6-2-1 from 12 starts, including two sparkling performances at 1 1/8 miles at the Spa.

Tom's d'Etat graduated on the Saratoga main in 2016 by four lengths, and in 2017 romped to a nine-length score in an optional-claiming tilt that netted a career-best 106 Beyer Speed Figure.

Tom's d'Etat won his stakes debut in December, taking the Tenacious at the Fair Grounds by 3 ½ lengths, ahead of a trio of graded stakes efforts, finishing off-the-board at Gulfstream Park in the Grade 1 Pegasus World Cup; second to McKinzie in the Grade 2 Alysheba at Churchill Downs; and third, last out, in the Grade 2 Stephen Foster again at Churchill.

Stall, Jr. said Tom's d'Etat has trained forwardly out of his most recent outing, which earned a 102 Beyer.

"He's continued to train well coming out of the Stephen Foster," said Stall. "I'm looking forward to running him back here at Saratoga where he's had previous success breaking his maiden and also winning an allowance race."

Although Tom's d'Etat was under consideration for Saturday's Grade 1, $1 million Whitney, Stall, Jr. said he wanted to find an easier spot for the ultra-consistent bay.

"We considered running in the Whitney, but I wanted to give him some class relief and wanted to give us a good chance at winning a race before deciding where we'll point him next. He's doing great and I think he really relishes it up here," said Stall, Jr.

Trainer Todd Pletcher will saddle a trio of formidable foes in American Tattoo, Wooderson and You're to Blame.

Calumet Farm and Roberto Antonio Vignati's American Tattoo, a 4-year-old Argentinian-bred son of Not For Sale, won the Group 1 Gran Premio Polla de Potrillos in September in his native country.

Following a troubled North American debut at Churchill Downs in May, American Tattoo persevered with a prominent effort to win a 1 1/16-mile optional-claiming route at Belmont by 1 ¼-lengths that garnered an 88 Beyer.

Luis Saez, who has won five stakes at Saratoga this meet including the Grade 2 Bowling Green with Channel Cat on Saturday for Pletcher, will pilot American Tattoo from post 5.

Let's Go Stable's Wooderson, a 4-year-old son of Awesome Again, launched his 2019 campaign in good form, defeating winners at Keeneland and Monmouth. Last out, in the Grade 2 Suburban at Belmont, Wooderson failed to threaten after stalking the early pace.

Hall of Famer John Velazquez retains the mount from the inside post.

You're to Blame, a six-time winner for Bortolazzo Stable, won his seasonal debut in an optional-claiming tilt and nearly pulled off a remarkable recovery next out in the Grade 3 Pimlico Special. After being squeezed at the start of the 10-furlong test, You're to Blame rallied from 10th to finish second, defeated a neck by Tenfold.

Last out, the graded stakes-winning son of Distorted Humor finished fifth, defeated a length, in the Grade 2 Brooklyn Invitational.

You're to Blame will emerge from post 9 under Jose Ortiz.