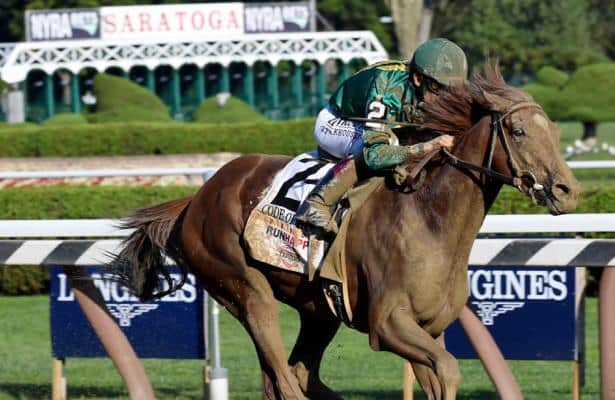 The final Grade 1 event of the 2020 Kentucky racing season offers a deep field and plenty of betting options.

Shug McGaughey trains Code of Honor, who in his last start at Churchill was elevated to second in the 2019 Kentucky Derby. The Noble Mission colt took the Travers (G1) and Jockey Club Gold Cup (G1) last season but has only one win this year in four starts.

The next three runners on the morning line – By My Standards (4-1), Owendale (5-1) and Mr Freeze (6-1) – run for Churchill-based barns and have scored stakes wins under the Twin Spires. All three enter the Clark seeking a first Grade 1 triumph.

The rest of the field includes other intriguing runners like the popular Bodexpress (8-1), the improving Aurelius Maximus (8-1) and Silver Prospector (15-1), who one year ago upset Tiz the Law on this weekend at Churchill in the Kentucky Jockey Club Stakes (G2).

Here is a look at the 2020 Clark Stakes field (trainers and jockeys in parentheses) with morning-line odds:

John Velazquez is projected to keep favorite Code of Honor near the back during the early stages. The Bluegrass State has been good lately to Velazquez, who won the Kentucky Derby with Authentic and a pair of Breeders’ Cup races at Keeneland with Authentic and Gamine.

For more analysis on the Clark field, check out free PPs courtesy of Brisnet.

“America’s Day at the Races” will broadcast Friday’s action from Churchill Downs, as well as racing from Aqueduct.

Padraic Manocchio digs into the Brisnet past performances, which show By My Standards sporting the field’s best Prime Power number. Bodexpress tops the Late Pace Last Race category, although he takes a big step up in class here.

Jarrod Horak focuses on the Clark for Friday’s Best Bet. He notes that Owendale has dealt with “nothing but bad luck” in terms of pace setups in 2020, but figures to face an honest pace here.

Speaking of Owendale, his sire Into Mischief is the 6-1 co-favorite in the Kentucky Derby Sire Future Wager along with Tapit. Matt Shifman offers five keys to help with KDSFW wagers.

On this week’s edition of HorseCenter, Matt Shifman and Brian Zipse preview the Clark and other stakes this holiday weekend.

Reinier Macatangay previews the Clark by reviewing last month’s Fayette Stakes (G2) at Keeneland. He writes that Coastal Defense was on his way to a career effort in that race before encountering traffic issues and could offer a good value Friday.

First post Friday is 1 p.m. EST with full Churchill Downs entries available via HRN. The Clark is the 10th of 11 races on Churchill’s Black Friday card, with all events running over the main track.

Here is a look at some of the other races Friday under the Twin Spires:

Dennis’ Moment, a 2-year-old buzz horse one year ago, makes his first start in nearly nine months Friday. The 3-year-old Dale Romans trainee, 10th most recently in Gulfstream Park’s Fountain of Youth Stakes (G2) back in February, is the 7-5 second choice in a field of five. A Tiznow colt, Dennis’ Moment’s last start at Churchill was an Iroquois Stakes (G3) victory in September 2019. Silver State, an allowance winner last month at Keeneland, is the 6-5 favorite for trainer Steve Asmussen and jockey Ricardo Santana Jr.

Liam’s Map colt Copa will hope his fourth time is the charm Friday as the 3-1 favorite in this event for 2-year-olds. Brian Hernandez Jr. gets the call on the Dallas Stewart trainee, who was 11th last month at Churchill in his third career start. Barakat and He’smyhoneybadger are each 7-2 on the morning line. The former debuts here for Asmussen; the latter also makes his first start for trainer Brad Cox.

Kentucky Oaks fifth-place finisher Tempers Rising runs again at Churchill on Friday as 5-2 favorite in this event for fillies and mares 3 and up. Julien Leparoux will pilot the Bayern filly, who has hit the board nine times in 13 starts for Stewart but only shows one win. The 7-2 co-second choices are O Seraphina from Joe Sharp’s barn and Villanelle for Cox.

One race before 2019 Travers Stakes hero Code of Honor runs in the Clark, another runner from last year’s mid-summer derby, Looking at Bikinis, is a 2-1 favorite for this dirt mile. The 4-year-old Lookin at Lucky colt was 11th last year in the Travers. Tyler Gaffalione gets the call for Brown on Looking at Bikinis, who was fifth last month at Keeneland in an allowance event. Vickie Foley trains Grade 1 winner Hog Creek Hustle, who is 3-1 after running seventh earlier this month at Keeneland in the Breeders’ Cup Sprint.

W.S. Farish’s multiple Grade 1 winner Code of Honor will take on 13 rivals including graded stakes winners By My Standards, Mr Freeze and Owendale in Friday’s 146th renewal of the $500,000 Clark (G1), the marquee race of the Fall Meet at Churchill Downs.

Code of Honor, a 4-year-old son of Noble Mission, achieved Grade 1 glory in last year’s Travers and Jockey Club Gold Cup. Trainer Shug McGaughey III had his sights set on a strong 2020 campaign but when the COVID pandemic struck, he was forced to alter the colt’s plans.

“He’s just been a victim of circumstances with the COVID situation,” McGaughey said. “I would’ve liked him to run him in the Westchester which would’ve been the start of the Belmont meet in the spring. I would’ve spaced the races out that way. That didn’t work out so we couldn’t run until June 6 in the Westchester (G3). He won that and I really had in my mind I wasn’t going to run him back until the Whitney (G1). He’s run a lot better with his races spaced.”

Hall of Fame jockey John Velazquez will ride Code of Honor from post 3.

“Johnny told me after the Met that this horse definitely wants two turns,” McGaughey said. “His race in the Kelso against Complexity, who was the favorite in the Breeders’ Cup Dirt Mile, was a really good race. We had to change riders on him that day. Javier (Castellano) is obviously a great rider but may not have known him as well as Johnny did. All in all, it was sort of just a messed-up year. Now he’s gotten his space and he’s run good over this Churchill track.”

Code of Honor was one of the top 3-year-old prospects in 2019 following his victory in the Fountain of Youth (G2) at Gulfstream Park. He placed second in the Kentucky Derby prior to his Travers and Jockey Club Gold Cup victories.

Among the other top older horses that entered the race is Allied Racing Stable’s Alysheba (G2) winner By My Standards. Trained by Bret Calhoun and ridden by Gabriel Saez, By My Standards finished eighth in this year’s Breeders’ Cup Classic, his only off the board finish through seven starts in 2020.

“He loves this track at Churchill Downs, so I think he’ll do a lot better getting back here,” Saez said. “We didn’t get the best of trips in the Breeders’ Cup and he didn’t like the surface that day. He worked really well (on Friday). He just has such a big stride and covers a lot of ground.”

Also entered is Rupp Racing’s three-time Grade 3 winner Owendale. Trained by Brad Cox, Owendale finished second behind By My Standards in the Alysheba. The 4-year-old son of Into Mischief began his 2020 campaign with a victory at Churchill Downs in the Blame Stakes. Owendale enters the Clark following a fifth-place effort in the Breeders’ Cup Dirt Mile at Keeneland.

“In the Alysheba there was no pace,” Cox said. “He doesn’t really like kick-back so we have to make sure he gets out in the clear. I think his efforts this year have put him in contention with some of the older horses in this handicap division.”

Owendale was the runner-up finisher behind Tom’s d’Etat in last year’s Clark. Florent Geroux has the call on Owendale from post 9.

Jockey David Cohen will ride Mr Freeze in the Clark from post 7.

Finishing just a neck behind Mr Freeze in the Fayette was Stonestreet Stables, George Bolton and Peter Leidel’s Aurelius Maximus. The 4-year-old colt was transferred from trainer Chad Brown to Steve Asmussen at the end of 2019 and immediately found success reeling off consecutive allowance victories.

Aurelius Maximus is one of two horses entered in the Clark for Asmussen. The other is Ed and Susie Orr’s four-time winner Silver Prospector. The 3-year-old son of Declaration of War rallied to win a 1 1/8-mile allowance event Oct. 30 at Churchill Downs. Earlier in his career the gray colt was on the Kentucky Derby trail with victories in the Kentucky Jockey Club (G2) and Southwest Stakes (G3).

Ricardo Santana Jr. has the call on Aurelius Maximus from post 5 while Gerardo Corrales picks up the call on Silver Prospector from post 14.

Rafael Bejarano has the mount on Bodexpress and will break from post 8.

In total, the Clark field has accumulated 58 wins with earnings of more than $12.4 million.

Owendale By My Standards Code of Honor

» Horse: Owendale
» Horse: By My Standards