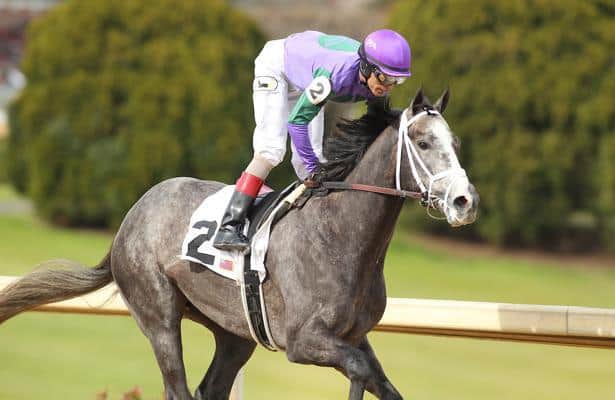 One week after racing’s biggest stars contested the Breeders’ Cup, the sport’s hard knockers are featured Saturday under the Twin Spires.

The Jewel is the richest of the day’s events, featuring runners going 1 1/8 miles over the main track. All 10 entrants have started for a claiming price of $35,000 or less since the start of 2021.

Favorite Intrepid Heart is a 6-year-old Tapit gelding making the 28th start of his career Saturday. He has eight career wins and enters off a runner-up effort Sept. 28 at Churchill Downs in an allowance race.

After starting his career 2-for-2 in 2019, Intrepid Heart finished third in Belmont Park’s Peter Pan Stakes (G3). That preceded a Belmont Stakes bid in which he finished eighth for trainer Todd Pletcher.

Intrepid Heart did not return to the graded-stakes level after the Belmont, and Robertino Diodoro claimed him off Pletcher in October 2020 at Keeneland. He passed through a series of barns since then and now runs for Joe Sharp, who has tabbed jockey Tyler Gaffalione to ride the morning-line favorite.

Benevengo (7-2) also has a Grade 1 race under his belt, his being a fifth-place effort in July at Monmouth Park after setting the early pace in the Haskell Stakes. Trained by Jesus Cruz, he won the Polynesian Stakes on Sept. 24 at Pimlico.

Here is a look at the field for the 2022 Claiming Crown Jewel (trainer and jockey in parentheses) with morning-line odds:

TimeformUS’ pace projections show Calibrator going to the lead under jockey Edgard Zayas and setting a fast pace, followed by Benevengo. Favorite Intrepid Heart is expected to mount a rally from near the back.

Here is a look at other stakes races of note Saturday at Churchill Downs and beyond. All post times are EST.

Transient (3-1) makes a stakes debut for trainer Saffie Joseph Jr. off a Sept. 25 allowance win at Aqueduct. Jockey Jose Ortiz heads north of the U.S.-Canada border to ride the 4-year-old Sea The Stars filly. Christophe Clement trains Creative Cairo (7-2), an allowance winner who finished second at that level Oct. 20 at Aqueduct. Charges Dropped (4-1) also steps up off an allowance race, hers resulting in an Oct. 26 score at Presque Isle Downs.

Beverly Park (7-2) aims for career victory No. 23, and a national-best 13th of 2022, when he wheels back off a starter allowance win Nov. 3 at Charles Town. Jockey Rafael Bejarano will be up on the 5-year-old son of Munnings for trainer Norman Cash. Randy Klopp trains Silver Moon Road (4-1), who heads south to Churchill off five straight wins at Horseshoe Indianapolis, including in a Nov. 1 starter allowance race. Powerfully Built (4-1) was a starter optional claiming winner Sept. 28 at Delaware Park for trainer Ronald Abrams.

Artie’s Princess (5-2) won the 2020 Bessarabian while running for trainer Wesley Ward and will try to take the 2022 running for current trainer Joseph. Ortiz gets the call on the 5-year-old We Miss Artie mare, winner of the Presque Isle Downs Masters Stakes (G2) on Sept. 19. Lorne Richards trains Hazelbrook (3-1), who earned a second Grade 3 victory Oct. 15 when taking the local Ontario Fashion Stakes. Our Flash Drive (7-2), also a dual Grade 3 victor, was runner-up for trainer Mark Casse on Oct. 22 in the local Ontario Matron Stakes (G3).