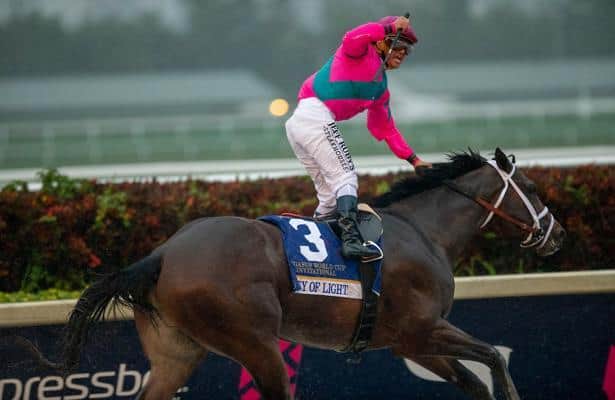 The U.S.-based City of Light and Australian mare Winx are among the top horses in the initial Longines World’s Best Racehorse Rankings for 2019. Both received a rating of 125, as did top Hong Kong miler Beauty Generation. City of Light closed out 2018 by winning the Breeders’ Cup Dirt Mile, then stretched out an extra eighth in the Pegasus World Cup at Gulfstream Park on Jan. 26, romping home in the slop to win by 5 ¾ lengths.

The Michael McCarthy-trained son of Quality Road has since retired to Lane’s End Farm in Versailles, Ky., for stud duties.

Winx was honored as the 2018 co-World’s Best Racehorse along with British runner Cracksman at the beginning of the year. Chris Waller has trained her to 31 consecutive victories, and she is expected to run two more races before retiring at the end of the Australian racing season.

The 8-year-old daughter of Street Cry has won the Apollo Stakes (G2) and the Chipping Norton Stakes (G1) so far this year. Her last two targets are the March 23 George Ryder Stakes (G1) and the April 13 Queen Elizabeth Stakes (G1).

Beauty Generation, Hong Kong’s reigning Horse of the Year, is sitting on a seven-race win streak, which includes this year’s Stewards’ Cup (G1) and the Queen’s Silver Jubilee Cup (G1) at Sha Tin. Trainer John Moore is eyeing a repeat victory in the Champions Mile (G1) on April 28.

Fourth in the rankings is Happy Clapper (123), who finished second to Winx in both the Apollo and the Chipping Norton. Five horses are tied in fifth with a ranking of 120: Hong Kong’s Beat the Clock and Exultant, U.S. sprint champion Roy H, and Australia’s Santa Ana Lane and Trapeze Artist.

Roy H, the two-time Breeders’ Cup Sprint winner, made his seasonal bow in Santa Anita’s Palos Verdes Stakes (G2) on Jan. 19 and cantered home to a four-length victory. He will make his next start March 30 in the Dubai Golden Shaheen (G1).