Cigar remains the invincible one for Hall of Famer Bailey 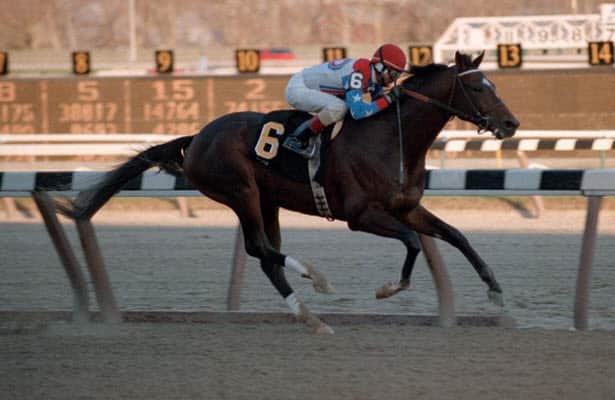 Consistent success is a good way to earn sports immortality.

The ability to consistently remain victorious is the tallest of asks for any athlete.

When Allen Paulson’s Hall of Famer Cigar won 16 straight races against the best horses of his generation, which at the time tied the all-time win streak set by Citation, he was cemented as an all-time great.

A total of 11 Grade 1 victories across six racetracks, a perfect 1995 season with ten victories [eight of which were Grade 1 wins], and a record-breaking lifetime bankroll of $9,999,815 highlight Cigar’s long resume as one of the most noteworthy lists of accomplishments in horse racing history.

But the collection of trophies wasn’t the primary factor in Hall of Fame jockey Jerry Bailey forming such a close bond with the two-time Horse of the Year.

“It was his personality. He was just so cool,” Bailey said. “Early on after his first two or three races, I knew he was something special.”

Bailey had been a household name in the racing world prior to Cigar’s campaign, having ridden for 19 years at that point. A 56-time Grade 1-winning rider before becoming the regular rider of Cigar, Bailey had piloted 1993 Kentucky Derby winner Sea Hero, 1991 Preakness and Belmont winner Hansel as well as multiple Grade 1-winning millionaire Fit to Fight.

Yet, Bailey’s connection with Cigar was not what one might imagine. In his words, it was very similar to the relationship between a doctor and a patient.

But along came Cigar, and Bailey’s love and appreciation for the horse saw new heights.

It didn’t happen overnight, however.

Cigar broke his maiden on dirt at Hollywood Park in May 1993 for West Coast-based trainer Alex Hassinger, Jr., but raced on grass in each of his next seven starts. He was then transferred to the care of Hall of Fame trainer Bill Mott, who gave Bailey the leg up in Cigar's third start for new connections, finishing seventh on the grass in September 1994 at Belmont Park.

Hall of Fame riders Julie Krone and Mike Smith had a turn aboard Cigar for his next two starts before Bailey returned to the saddle.

“It was a case of musical jockeys,” Bailey said. “We all knew Bill thought that he was a better horse than he was showing.”

Cigar made a triumphant return to dirt under Smith in October 1994 and displayed astronomically different dimensions, garnering a 104 Beyer Speed Figure going a one-turn mile at Aqueduct. It would be the last time Cigar would race without Bailey on his back.

“I was riding at the Meadowlands that night when Mike called me up and said, ‘He ran off the TV screen’,” Bailey recalled. “Mike had committed to riding Devil His Due in the NYRA Mile. Ten days to two weeks before the they took entries for the race, I called up my agent [Bob Freize] and said, ‘Make sure you talk to Bill Mott and tell him that we’re available’. He won the NYRA Mile and that performance confirmed what Mike said to be true.”

Cigar strolled home a seven-length winner over Devil His Due in the 1994 NYRA Mile.

In Jan. 1995, Cigar picked up where he left off with a Gulfstream allowance win and solidified his legitimacy with a 2 ½-length score in the Donn Handicap (G1) the next month.

The ultimate test awaited Cigar in the year-end Breeders’ Cup Classic, where he would put an 11-race win streak on the line over his home track of Belmont Park.

There were still several obstacles against him, however. He drew post 10 in the 11-horse field, which included accomplished runners Unaccounted For, Star Standard, defending champion Concern, Tinners Way, as well as Group 1 winner Halling from Europe. Cigar would also be asked to contest over a muddy main track, which he had never done before. All of his victories on the main track had been over fast going.

Cigar broke sharply from his outside post, and Bailey let him do a little running to secure a favorable position.

“From the ten post, I had to let him run a little bit to be four wide and not seven wide,” Bailey said.

But while Bailey wanted to save ground, Cigar had different plans. Bailey tried as hard as he could to keep him in behind horses, but Cigar was moving so aggressively that he had no choice but to let him make a premature move around the far turn.

“The feeling was going out of my fingers, they were completely numb. He was pulling that hard,” Bailey said. “From the gate, he had the idea, ‘You said go, now let’s go’. I saw Unaccounted For and just like that he went from the four-path to the rail.

“He beat most horses by the time the field approached the far turn,” Bailey added. “When you’re out on the track, you just know. They were struggling to keep up and my horse is going 80 percent. Most horses he ran against he had beat by the time they got to the far turn. He was just so good and so talented. He had a high cruising speed. He wanted to be on the lead in every jump of the race and every point of call. He was basically a brilliant miler that Bill got to go a mile and a quarter.”

Cigar proved victorious by 2 1/2-lengths over L’Carriere in the Breeders’ Cup Classic and was dubbed by NYRA track announcer Tom Durkin as the, “unconquerable, invincible, unbeatable Cigar” in one of the most iconic race calls of all time.

With 1995 Horse of the Year honors wrapped up, Cigar proved himself the best horse in the country. But Cigar was much more than that for Bailey. The newly minted Hall of Fame jockey found himself going above and beyond the “doctor-patient” type of relationship he had with previous horses, even taking his 3-year-old son Justin to visit the champion the morning after the Classic.

“I wanted to spend as much time with him as I could. I would go back to the barn just to be around him and just to watch him graze,” Bailey said. “I took Justin back to the barn the morning after and that was a special moment. He was so gentle and calm when he wasn’t on the track."

Despite the perfect 10-for-10 season, there were still some who doubted Cigar.

“There were naysayers,” Bailey said. “Some people thought, ‘Okay, Cigar is legit, but what happens when another horse looks him in the eye?’”

Cigar answered that question with authority when he travelled to the Middle East for the inaugural running of the $4 million Dubai World Cup in March 1996. Cigar established clear command at the top of the stretch, but Soul of the Matter loomed large and powered his way to even terms.

But Bailey said he wasn’t fazed, knowing how much his horse had left.

“I was trying to save as much as I could for as long as I could. When Soul of the Matter came right up to Cigar, I was still in reserve mode,” Bailey recalled. “I could feel that motor get going again. I knew that he might get by me, but he wasn’t going to beat me. He might have gotten a head in front of me for a jump or two, but I could feel Cigar reengaging and I knew he had enough to do it.”

After a repeat win in the Massachusetts Handicap and a 3 ½-length victory in the specially-designed Arlington Citation Challenge at Arlington Park, Cigar tied the 16 consecutive win record of 1948 Triple Crown winner Citation. But Cigar’s memorable run came to an end after shipping to California for the Grade 1 Pacific Classic when second to longshot Dare and Go.

“At that point, he had some miles in him. He went from Florida, to Dubai, to Massachusetts, to Chicago and now Del Mar,” Bailey said.

Bailey said his plan in the Pacific Classic was to keep Cigar in striking range to that year’s Hollywood Gold Cup (G1) winner Siphon, who was sure to be the pacesetter.

But it was a little too close for comfort as Cigar gave way in mid-stretch, thus putting an end to his winning streak.

“I asked him more than he could do,” Bailey said. “For the next two to three years, I ran that race in my mind a hundred times a year.

“I rode a horse named Geri for Mott and Paulson in the Hollywood Gold Cup that year and lost to Siphon,” Bailey added. “Siphon got away early that day and it was my intention to not let him get away. In the Pacific Classic, Corey Nakatani was on Dramatic Gold and he was intent on trying to lock me in behind Siphon. I thought that at some point he would back off, but he didn’t.”

Even 25 years later, Cigar holds the highest sentimental value of any horse Bailey has ridden throughout his 30-year career.

“I wasn’t ever really all that nervous when I was on him before a race because he was just that good,” Bailey said. “Not only was he good, he was consistent. His style of running was the most you could ask for. He had great speed, acceleration, and there wasn’t a situation in a race that he couldn’t get you out of. He had so many tools and gears. Good horses can win over broken glass and he didn’t care. I don’t think he liked Suffolk all that well, but he still won over the surface twice.”

When Cigar retired at the end of 1996 following a third to Alphabet Soup in the Breeders’ Cup Classic at Woodbine, Bailey had piloted the horse to 16 of his 19 lifetime victories.

“They just wound up being a good fit,” Mott said of Bailey and Cigar. “It seemed like he always put him in a position to win.”

Mott said Cigar’s talent was a combination of both physical and mental superiority.

“He had the ability, but he also had the mindset to do it,” said Mott. “He showed up every time. If he had any issues or he wasn't feeling good, he ran through it anyway. As Allen Jerkens said, ‘the very good ones will win, even when it’s not their best day.’”

But what resonated the most for Bailey was Cigar’s gentle demeanor around the barn.

“The only other horse I’ve seen that was like that was [2015 Triple Crown winner] American Pharoah,” Bailey said. “He loved being showed off and being with people.”

After proving infertile as a stallion, Cigar spent the rest of his days being shown off to fans visiting the Hall of Champions at the Kentucky Horse Park, where he was stabled alongside all-time greats such as John Henry and Da Hoss until he passed in Oct. 2014 at the age of 24.

“There really was no one else like him,” Bailey said.