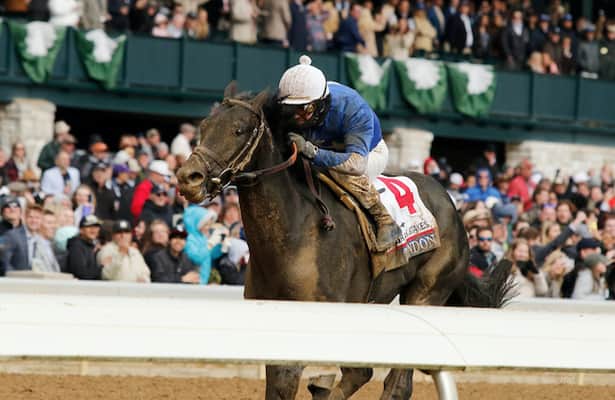 New York’s final Grade 1 race of 2022 has attracted four runners who have scored at that level.

Zandon enters with an 8: 2-3-3 record and $1.44 million earned for trainer Chad Brown and owner Jeff Drown. He raced on this card one year ago, finishing a nose shy of future Belmont Stakes hero Mo Donegal in the 2021 Remsen Stakes (G2).

As a 3-year-old, Zandon won Keeneland’s Blue Grass Stakes (G1) in April and has hit the board in five other graded stakes, most recently crossing second Sept. 24 at Parx in the Pennsylvania Derby (G1). Jockey Joel Rosario will be aboard for the Upstart colt’s first start against older runners.

Peter Miller trains Get Her Number, who seeks a first graded win since the 2020 American Pharoah Stakes (G1) at Santa Anita. He ships east to race less than two weeks after winning a Del Mar allowance event Nov. 20.

White Abarrio has not found the winner’s circle for trainer Saffie Joseph Jr. since taking the Florida Derby (G1) in April at Gulfstream Park. He starts for the first time since finishing fifth in the Pennsylvania Derby.

Here is a look at the field for the 2022 Cigar Mile (trainer and jockey in parentheses) with morning-line odds:

TimeformUS’ pace projections show Mind Control going to the front under jockey John Velazquez in a race that could favor runners on or near the early pace.

Visit Horse Racing Nation’s free past performances page for more information about the Cigar Mile and some of the day’s other big races.

Laurie Ross and Ashley Tamulonis go head-to-head handicapping the Cigar Mile, both landing on a different Grade 1 winner atop their boards.

Owner Jeff Drown has enjoyed one “pretty cool” experience after another with Cigar Mile favorite Zandon, who he bought two years ago for $170,000. Hear more from Drown on this week’s edition of the Ron Flatter Racing Pod.

Trainer Lynn Cash has two Cigar Mile entrants in Double Crown and Outlier. Cash talks about his career and his willingness to race horses rather than keep them in the barn.

An equine herpesvirus outbreak led to Churchill Downs shipper and Cigar Mile entrant O Besos not being allowed to race Saturday at Aqueduct. Ron Flatter notes that he is sure trainer Greg Foley would have liked to have known O Besos would be sent back to Kentucky before shipping him, but that the industry has broadly responded well to the outbreak.

This week on HorseCenter, hosts Shifman and Brian Zipse preview the Cigar Mile. The duo also looks at the Remsen Stakes (G2), a stop on the 2023 Kentucky Derby trail.

As trainer Rick Schosberg calls it a career at the end of 2022, the widely respected horseman has had time to reflect on some of the shining moments of his 35-year tenure of conditioning thoroughbreds. One of his fondest memories was a redeeming victory in the 1999 Cigar Mile with Affirmed Success.

Here is a look at other graded stakes scheduled for Saturday across the U.S. All post times are EST.

Julia Shining (3-5) won on debut Oct. 16 at Keeneland and returns in this race that pays Road to the Kentucky Oaks points on a 10-4-3-2-1 basis. Jockey Luis Saez and trainer Todd Pletcher team up with the Curlin filly, who closed from 11th of 12 to win her first start. Butch Reid trains Foggy Night (5-1), who was second Nov. 6 in the local Tempted Stakes after breaking her maiden third out in October at Parx. Royal Spa (5-1) was a debut winner Nov. 18 at Churchill Downs for trainer Rodolphe Brisset.

Tuskegee Airmen (8-5) is off to a 2-for-2 start for trainer John Servis, including a Rocky Run Stakes win as an odds-on favorite Oct. 15 at Delaware Park. Saez will ride the Street Sense colt in this Road to the Kentucky Derby prep, which awards points on a 10-4-3-2-1 scale. Linda Rice trains Arctic Arrogance (2-1), winner of the local Sleepy Hollow Stakes at one mile Oct. 30. The Danny Gargan-trained Dubyuhnell (5-1) won on second asking Oct. 2 in an off-the-turf maiden race over this Aqueduct surface.

Battle Bling (3-1) enters on a three-race winning streak for trainer Rob Atras, capped by a Turnback the Alarm Handicap (G3) triumph locally Nov. 4. Jockey Kendrick Carmouche has the mount on the 4-year-old Vancouver filly. Reid trains Dr B (4-1), a Parx allowance victor who was runner-up Oct. 29 in Aqueduct’s Pumpkin Pie Stakes. Bank Sting (4-1) has won New York-bred stakes and now aims to make the grade off a second-place effort Oct. 30 in the local Iroquois Stakes for trainer John Terranova II.

Liguria (3-1) ships to Southern California for trainer Chad Brown after finding the win column in her second career start Oct. 22 at Aqueduct. Jockey Flavien Prat will be up on the War Front filly. Phil D’Amato trains Irish debut winner Thebestisyettobe (5-1), who is 0-for-2 in the U.S., including a runner-up effort Nov. 12 in a local allowance race. The Brian Koriner-trained Sell the Dream (5-1) crossed fourth in the Golden State Juvenile Fillies Stakes at seven furlongs on the dirt Oct. 29 at Santa Anita.

Wit (7-2) is a dual Grade 3 winner for Pletcher and finished second, a neck shy of winner Balnikhov, on Oct. 29 at Keeneland in the Bryan Station Stakes (G3). Prat, who seeks his first Hollywood Derby score, gets the call on the Practical Joke colt. Shug McGaughey trains Celestial City (4-1), who made the grade Oct. 22 at Aqueduct in the Hill Prince Stakes (G2) for a second straight win. Cabo Spirit (5-1) prepped for the Hollywood Derby by winning Santa Anita’s Twilight Derby (G2) on Oct. 29 for trainer George Papaprodromou.